Parents of NYPD shooting victim, Saheed Vassell, attend his funeral down the street from where their son was killed

His family speaks about their nightmare ordeal. 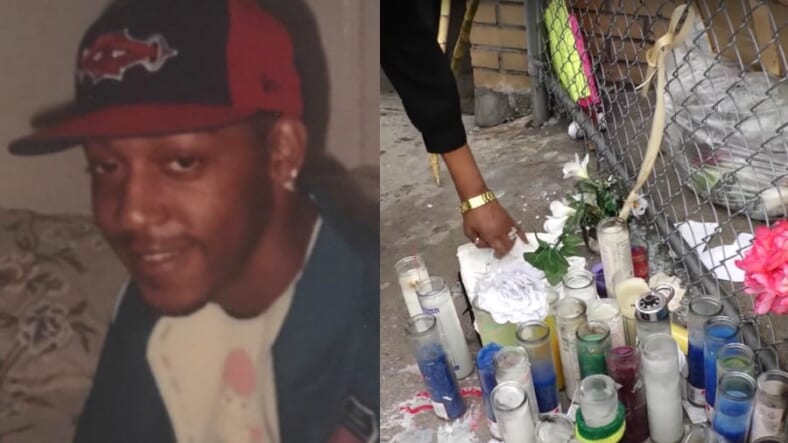 BROOKLYN- There is a candlelight memorial for Saheed Vassell sitting at the corner of Utica Avenue and Montgomery Street, which still has shattered glass around it. Posters with his picture are duct-taped to the metal fence above it.  A cardboard sign reads, “NYPD, please do not shoot my neighbors.”

The 34-year-old father and well-known face in the Crown Heights neighborhood, was killed by NYPD officers two weeks ago in a hail of bullets, just feet away from his second home, Kev’s Unique Barber Shop.

Police report they were responding to 911 calls about a man erratically pointing a gun at people in the neighborhood.  Vassell, a welder by trade, had no gun—only a metal pipe.

“He’s like family to everybody in here,” says Kevin Davis, a barber at the shop who witnessed his friend’s death, in an exclusive interview with theGrio.  “He’s not disrespectful. Everybody respect him, everybody love him.”

Today, Vassell’s family will hold funeral services for him at St. Anthony Baptist Church, down the street from where he was killed, which is expected to draw a large crowd.

Raised by Jamaican parents, Vassell has four brothers and five sisters—one of whom is currently serving in the Navy and flew home from Japan to bury her brother.

“His funeral is drawing near and the nearer it draws, the weaker I become,” says his father Eric Vasell in a weary voice.  “I’m looking at one thing… his coffin going down in the grave. When I think about it, it’s like my blood dries up.”

Eric and Lora Vassell, parents of Saheed Vassell,  say their son was beloved by the community and didn’t deserve to die at the hands of police. (Natasha S. Alford/theGrio)

Who was Saheed Vassell?

According to his family, Vassell was diagnosed with bipolar disorder, shortly after the death of his best friend who was killed by a police lieutenant in 2008.  Vassell was a regular churchgoer and often carried a small Bible with him. Many Crown Heights residents described him as a colorful personality, who helped run errands for the elderly and enjoyed having a beer.

In the aftermath of his shooting death, NYPD released an edited video of surveillance footage showing Vassell pointing his metal pipe at pedestrians, with overlay of text from the 911 calls they allege led to the police’s confrontation.

But Vassell’s friends who witnessed the shooting, say the three plainclothes officers and one uniformed officer who shot him, jumped out of a car and began shooting at Vassell within seconds.

“They wasn’t ducking for cover,” Davis tells theGrio. “They wasn’t just give him a chance, ‘Freeze or drop your weapon.’  Them do it so fast.”

Now the community is demanding to know, why police shot Vassell 10 times and could not de-escalate the situation, with a massive crowd showing up last week in protest.

Vassell’s mother Lorna, wipes away tears as she talks about her son, the one person, she says would tell her daily that he loved her before leaving home.

READ MORE: NYPD killed Saheed Vassell after he was haunted by fatal police shooting of his best friend

“When police murder Black men they can get out of it…because they always put the police first,” she tells theGrio. “When the victim pass away, no one cares about them anymore because they died— and the police, they get to move on with their life.”

Vassell says her son didn’t fear police because neighborhood officers knew him and he considered them friends.  The Vassell’s want the names of the four officers involved in the shooting to be released.

Saheed Vassell poses with his newborn son, Tyshawn, who is now 15. (Family photo)

The case is being investigated by Attorney General Eric Schneiderman, as a result of a 2015 Executive Order signed by New York’s governor in the wake of Eric Garner‘s death.

But after the acquittal of NYPD officer Wayne Isaacs in the death of Delrawn Small last year amongst other national cases, the Vassell’s say they feel up against great odds to get the justice they desire so deeply.

“I’m asking all officials, from the mayor to the attorney general, look into this case entirely,” says Mr. Vassell. “Don’t just take it for granted that a young man was killed.”

“Listen to us, listen to the community… Then you will realize that this man did not deserve to die like this by the hand of the NYPD.”