Nice For What? Rihanna saying Drake made her ‘uncomfortable’ sparks debate about courtship and rejection

As sundress season descends upon us, ladies get ready for all that unwanted attention. 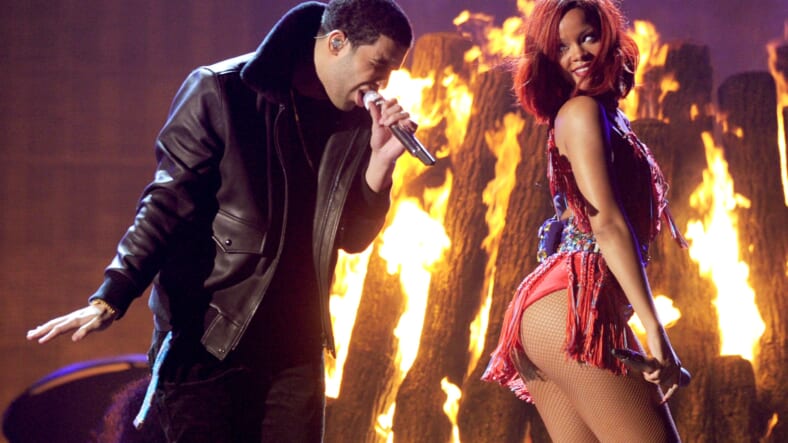 Rihanna’s interview in Vogue‘s June issue was published online Thursday, and has sparked a debate between men and women about courtship and rejection.

When Drake declared his love for Rihanna at the 2016 MTV VMAs, it was one of the most talked-about moments of the whole night. Now, Riri is setting the record straight about how she really felt about that moment – and it’s not what most people were expecting.

During the sit down with Vogue, she recalls her appearance at the award show two years ago, where she was given the prestigious Video Vanguard Award by Drake.

Drake surprised Rihanna at the #MTV #VMA with a Vanguard award and a confession of love https://t.co/kdzr8UiOQl pic.twitter.com/iB33l2vg4n

At the time, Drake hailed her as one of his “best friends” and said he’s been in love with her since he was 22-years old. This quickly fueled speculation that the longtime buddies were an item prompting papparazzi and fans to watch their every move for months afterwards.

Now the Fenty Beauty creator is admitting that although she was happy to receive her award, Drake’s scene stealing speech made her feel “uncomfortable.”

“The VMAs is such a fan-focused awards show, so having that energy around me, and knowing the people who had received the award in the past, made it feel like a big deal,” she said. “Waiting through that speech was probably the most uncomfortable part. I don’t like too many compliments. I don’t like to be put on blast.”

She then clarified their current status, stating: “We don’t have a friendship now, but we’re not enemies either. It is what it is.”

Why is she to blame?

This seemed like a pretty straight forward and candid admission, but things took a left when on-air radio personality Charlamagne Tha God posted a clip of the interview along with the caption, “This what happens when you tell women to be “Nice For What To These N—-s”

This what happens when you tell women to be “Nice For What To These Niggas” https://t.co/X5ZDgkXmku

Many took the tweet to be an implication that Rihanna was being difficult for not appreciating Drizzy’s chivalry and acting ungrateful.

Any woman whose ever had a man try to talk to her, only to have him call her ugly, fat, a whore or any other demeaning verbiage after she rejects him has seen this before.

As sundress season descends upon us, its that time of year when this behavior will be at an all time high and women all over the country will have to start preparing themselves to be told to “smile” by random men who think they should be grateful for the unwanted attention.

Many people don’t see a problem with any of this. In the same way they think that Rihanna should’ve only been flattered by Drake hijacking a moment about her career and reducing it to tabloid fodder about whether or not they’re “smashing.” They also think “females” should just be happy anyone cares enough to even acknowledge them.

As writer Erika Hardison wrote in her piece for the Huffington Post last year, “I am extremely uncomfortable when strange men tell me to smile. It’s overbearing, invasive and slightly eerie… I can’t help but to wonder if these same men that are commanding women to smile also tell other men to smile? Telling a woman to smile, even if your intent is purely innocent is dictatorial and it shouldn’t happen.”

In this revelation lies the problem with all of this. Yes, women want you to be chivalrous and kind, but what we don’t want is you telling us how to show up. Chivalry isn’t an excuse to take away our free agency or boundaries.

If you see a beautiful woman and want to tell her you appreciate her, say it respectfully. And if she isn’t interested, or God forbid chooses not to smile, then leave her alone. It’s really that simple.

a lot of women don’t like being fed excessive compliments. it’s awkward. so the fact that yall are shaming Rihanna over speaking on her discomfort for the sake of preserving Drake’s feelings is very misogynistic.

a woman’s comfort > a man’s happiness.

Biological anthropologist Helen Fisher, who’s studied and wrote about women’s changing roles in society, says men usually only tell a woman to smile for one of two reasons: they are caring or they are controlling.

A complete stranger has no way of knowing which one you are, and if you start calling her a bitch, a whore, or stuck up, all you’ve done is confirmed that you are most definitely the latter.

And before anyone starts saying this is just a bunch of women making a big deal out of nothing, please be clear that this seemingly innocent mindset that we need to be docile, pleasant and grateful at all times to men, creates an environment of fragile masculinity that renders dudes incapable of hearing no without going into a fit of rage.

Let’s not forget stories like that of 16-year-old Shemel Mercurius who was shot three times in Brooklyn last year after turning down the advances of a grown man. He thought and said all the things the brothers attempting to shame Rihanna are joking about so callously online and it cost that young woman her life.

Until we start teaching men that no one’s body, or smile, belongs to them except their own, and that women are allowed to say “no” without being met with aggression, incidents like this will continue to happen.

If a woman says she’s uncomfortable, yes even if she’s a bad ass Bajan pop star, and your first reaction is to call her out of her name, your manhood is probably a lot more insecure than you think.

You might wanna handle that before the weather gets any nicer.

Authors Note: While we’re on this topic, please feel free to check out Brooklyn-based artist Tatyana Falalizadeh who started a street art project titled Stop Telling Women to Smile which was featured in the first season of Spike Lee’s Netflix series, She’s Gotta Have It.