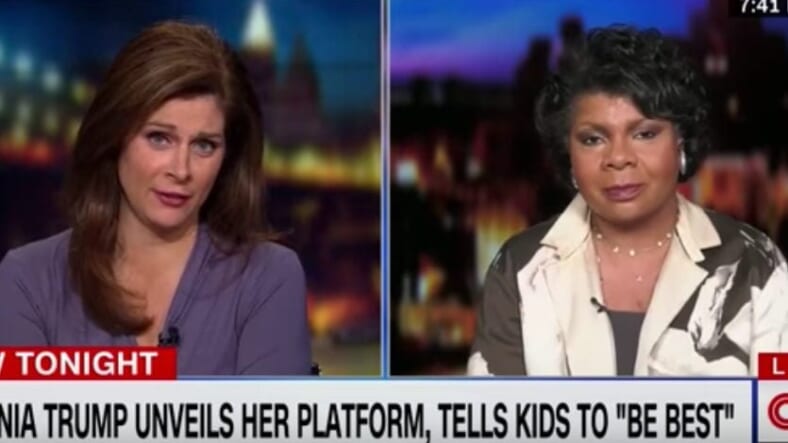 The ‘Be Best’ campaign was reportedly designed to combat opioid drug, and promote positively on social media while encouraging a healthy lifestyle.

“As we all know, social media can be both positively and negatively affect our children, but too often it is used in negative ways,” Melania said during a speech on Monday.

“When children learn positive online behaviors early on, social media can be used in productive ways and affect positive change.”

According to the Daily Mail, Ryan and CNN’s Erin Burnett were discussing the long-awaited launch of Melania Trump’s ‘Be Best’ campaign when the popular White House correspondent and cable news commentator made the remark.

“This is a First Lady who is not culturally American, but she is learning the ways,” Ryan told Burnett.

Critics are saying that the cyberbullying campaign seems a bit hypocritical since Melania’s husband President Donald Trump, eviscerates foes and media alike on Twitter nearly on a daily basis.

“She’s well aware of her husband’s cyberbullying,” Ryan said. “He’s considered by some, well many I would say, in different sectors, one of the biggest bullies.”

“He will call you out in a moment’s notice and she stood in front of him and basically said she wants to show young people how it’s done and do it right.”

Right wing critics on the other hand immediately took issue with Ryan’s comment about Melania calling out the point that the first lady came to the US in 1996 and later obtained her citizenship.

“On @OutFrontCNN, @AprilDRyan just said @FLOTUS is not “culturally American.” What does that even mean?” he tweeted.

“On a day when Mrs Trump unveiled a very important initiative #BeBest, reporters can’t bring themselves to talk about anything but rumors and innuendo.”

“Now that you, a reporter, are saying the same, can they cry racism? Or do you just hate foreigners? Wow, this is easy, I see why the left likes it.”

Culture is not race! If I move to France now and live for 30 years in Paris, I am not culturally French. I am Culturally American. Culture is norms, behavior and social construct.

There were also others that were critical of Melania Trump’s new program for stealing some of the components from Michelle Obama’s initiative.

The First Lady’s office released a scathing statement in response to those questioning the Be Best program.