The conservative radio host is known for his conspiracy theories. 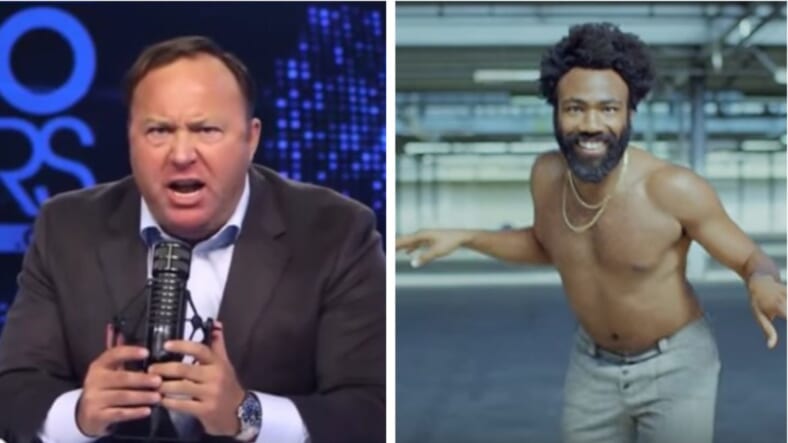 Childish Gambino aka Donald Glover‘s new video for “This is America” has launched a million think pieces because of its layered lyrics and haunting visuals, but conservative radio host Alex Jones has reduced it all to “voodoo.”

Jones, who just last week was praising Kanye West‘s MAGA meltdown, is known to spout conspiracy theories in his InfoWars show, so it’s no surprise that a project like “This is America” caught his eye.

The video is filled with commentary on gun violence, racism, pop culture, and police brutality. Jones takes all of that as evidence of a vast left wing conspiracy.

READ MORE: 5 Powerful messages from Childish Gambino’s ‘This is America’

Apparently Jones has spent some time becoming an expert in voodoo because he states unequivocally that the popular, contemporary dances Childish Gambino does throughout the video are actually “voodoo dances.”

“So it’s all this emotional idiocy and people fittingly doing a voodoo dance. You know, I’m looking at video they just played of the Donald Glover Childish Gambino dance he is doing that he probably thinks you think is real original. That’s a voodoo dance he is doing,” Jones said on his show. “In fact that’s a full ‘nother subject. Pull me in with voodoo dancing, people in trance, and that is a voodoo dance 110 percent. You’ve got all of that then personified through artwork but they don’t think you know what you’re actually looking at. The Clintons like to go and do their own voodoo rituals, that’s in the news.”

Jones did not elaborate on the end goal of this entrancing voodoo dancing that’s allegedly in the video, but somehow the Clintons are involved.  This is the same man who thinks the grieving parents from the Newtown shooting are paid actors, so it’s not shocking that his interpretation of a nuanced analysis of the socio-political state of this country take a sharp turn from facts and reality.