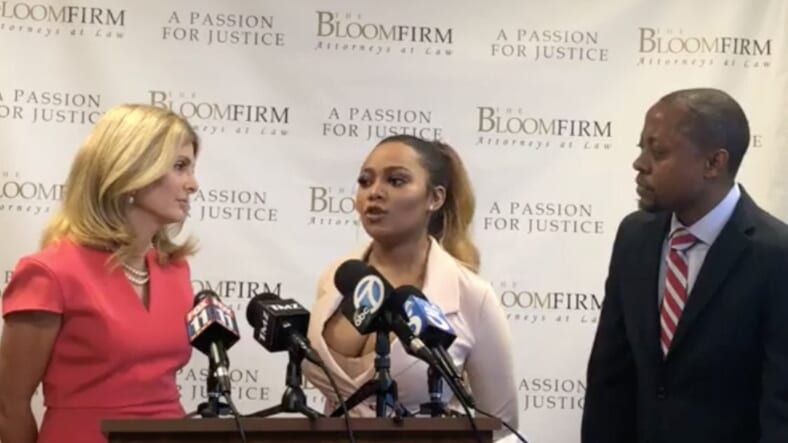 On Thursday, the singer and reality star held a press conference to announce her plans to sue Akbar Abdul-Ahad and his homie, 50 Cent, (Curtis Jackson) for sharing private photos and videos of her performing sex acts on their social media accounts last week.

Mari alleges that Akbar hacked her Instagram account after she dumped him and posted the humiliating photos as revenge for breaking his heart. She’s suing 50 Cent for sharing the photos to his 12 million followers on social media. She’s also planning to file a police report on the incident.

There are reports that Teairra Mari retaliated by smashing the windshield on Akbar’s Mercedes G-Wagon last week.

Teairra Mari has enlisted the help of attorney, Lisa Bloom, to represent her case.

“We have a significant piece of evidence that points to [Akbar],” Bloom said at the press conference.

Check out the clip of the conference:

Fiddy doesn’t seem too bothered by the announcement considering the shady response he posted on Instagram.

“Oh Lisa stop, ?don’t make me tell your mom. LOL Photo Credit: GloriaAllred.com ?get the strap,” he posted along with a photo go himself next to celebrity attorney, Gloria Allred.

We will have to wait and see how this shakes out, but one thing is for certain. Men NEED to stop using private moments between lovers to publicly shame and humiliate women who leave them. No matter what the reason is, that kind of invasion of privacy is not cool on any level and women deserve for their bodies and sexual relationships to be kept private whether a relationship ends badly or not.

As far as 50 Cent goes, he has been bullying people for years, but he should pick on somebody his own size.