Jackson has an inspiring tale. 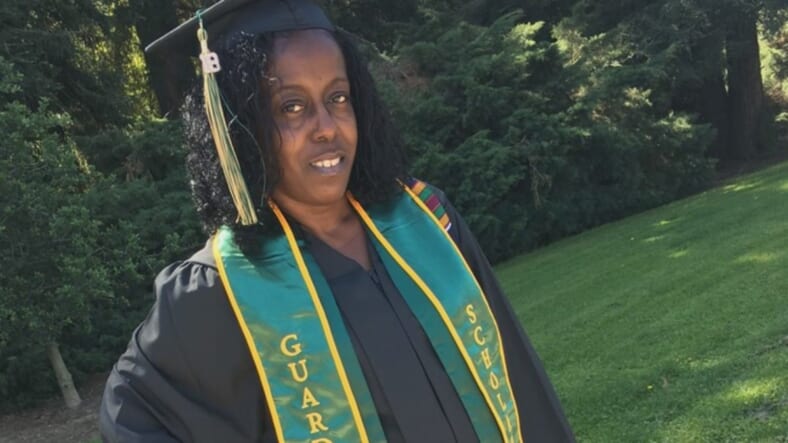 Kendra Jackson proved to herself that past circumstances could not stunt her future dreams.

The 46-year-old Sacramento woman spent her early years in and out of foster care, and she eventually picked up a drug habit that almost derailed her life, reports WLTX.

Despite the odds against her, today Jackson is celebrating her graduation from California State University Sacramento.

That’s a big accomplishment considering the numerous obstacles Jackson has had to overcome in life. She was in the foster care system until she aged out of it and after a few bad life decisions, she found herself in jail in 2009. Jackson was charged and convicted of conspiracy to possess and distribute drugs.

But while serving her one-year prison sentence, she was able to defeat her alcohol addiction. Jackson credits social workers with giving her the guidance and resources she needed to set her life on a different path. They left such an indelible impression on her that she decided to pursue a social work career herself.

Now with a bachelor’s degree in social work in hand, Jackson plans to continue her education and pursue getting a doctorate.

This is the season for making great gains and securing a life changing degree.

Darrell Landon Kelly has the aptitude for excellence too after graduating with a Master’s degree and a law degree on the same day.

The 24-year-old scholar turned heads with his stellar accomplishment of snagging two advanced degrees—one from the University of Cincinnati College of Law and Xavier University’s Williams College of Business.

Not only that but Kelly had to go through the pomp and circumstance of one graduation ceremony then dash across town to the other! It was a day filled with distinction that he’ll surely never forget.

—Decades after punishment for Alabama sit-in, former students get justice—

“Some kids do great. Some kids do wonderful. But when you go past great and get your master’s and turn into a lawyer, you do like the Bible says: exceedingly and abundantly… That’s where he went — exceedingly more than we ever asked for,” family friend Richard Layson told WCPO.

His mother, Lisa Kelly beamed with pride when talking about the level of support it took to raise a high-achiever.

“I was born to five generations of love, and I passed that on to them”, said Kelly.