In the latest #DrivingWhileBlack incident caught on cellphone video, Houston police give a bizarre order to a group of people in a car they pulled over 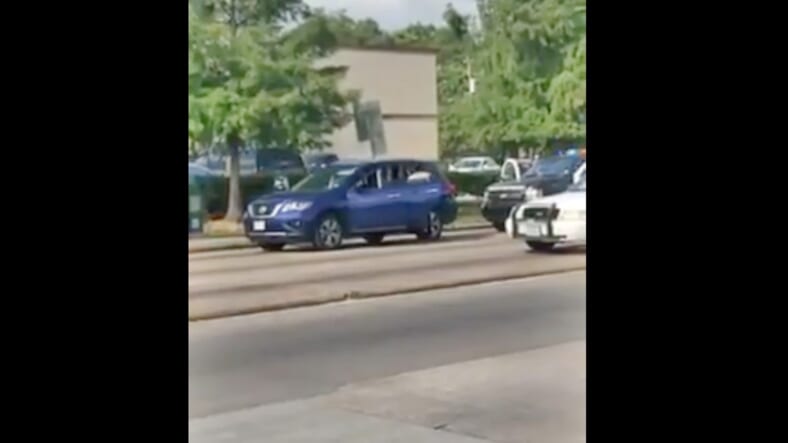 A Texas cop caused a stir after a shocking video surfaced of an officer ordering a group of African-Americans out of their car telling them, “pretend like we’re going to shoot you!”

Denee Harris witnessed the incident and recorded the video which has now gone viral, reports Houston TV station KTRK. Harris said she was apprehensive about the traffic stop and started recording because of the uncertainty of how things might have played out.

“I was so scared. I didn’t know how it was going to end,” said Harris whose video was posted on Storyful.

The police officer can be heard on the video demanding for the four passengers in a blue Nissan SUV, to get out of the vehicle.

When a Black woman emerged, the officer could be heard of saying, Hands up! Put your hands up. Over your head! “Pretend like we’re going to shoot you!”

“Why would he say that?” Harris can be heard saying as she records the interaction.

The insensitive statement is causing a stir given the consistent news of Blacks that have been shot and killed by police during routine traffic stops. Also, tensions are still heightened in the area since a student killed 10 people and wounded another 10 during a shooting rampage at Sante Fe High School in Houston’s suburbs.

Harris said she also witnessed a cop snatch crutches from one of the passengers’ hands before detaining him. She also speculated that the police were possibly planting evidence.

Houston Police Department said they are investigating the situation and issued this statement:

“During the stop, the officers followed tactics and procedures designed to take suspects into custody in a manner that maximizes safety for both officers and suspects,” said Chief of Police Art Acevedo’s statement read.

Randall Kallinen, a Houston civil rights lawyer, told the New York Daily News that the officer’s behavior was “highly unprofessional.” He also said that the Houston Police Department has a history of using excessive force.

Out of the four passengers, Zachary LeBlanc was arrested and charged with one count each of possession of a controlled substance and theft of a motor vehicle. The 53-year-old remains in the Harris County Jail with no bond.