Teacher tells 10-year old when police shoot you, it will be your own fault

Malachi Pearson, a 10-year-old was brought to tears by a frustrated teacher who told him something that outraged his mother 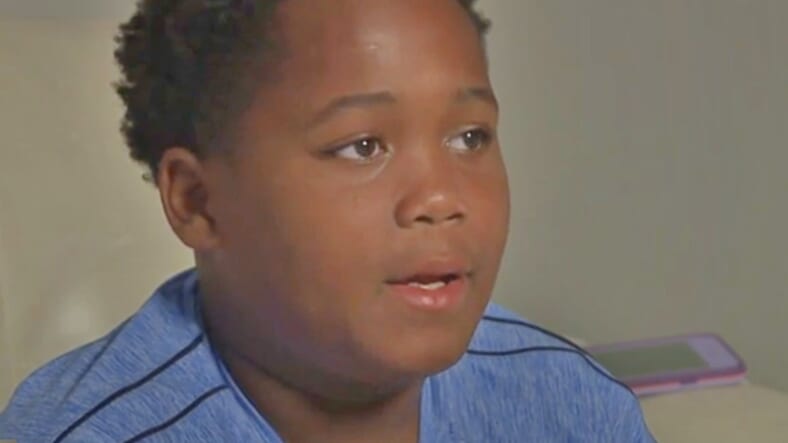 A 10-year-old Kansas boy was brought to tears by a teacher who told him that if he is ever shot dead by police, it would be his own fault and now his mother is furious.

“Me and my friend were playing, and then [the teacher] like pushed us away. We weren’t fighting. We were just playing and laughing,” Malachi Pearson told Kansas City television station WDAF. ”She told me when you turn 16 and the police shoot you, the only person you can be mad at is yourself.” He said he started to cry upon hearing that.

The fourth-grader at Rosehill Elementary School in Lenexa, Kan., is being raised by a single mom because his father was shot and killed when he was a baby. His mother, Mahogany Foster, removed his from enrollment from the school two days later.

“That was a low blow, and that was something personal,” she said of the unidentified teacher’s comment. “You shouldn’t say it to any child.”

The teacher has reportedly been put on administrative leave, according to Foster.

Foster said that the school’s principal was of little help when she addressed the incident and accused him of trying to downplay what happened.

READ MORE: Donald Trump on NFL players who kneel during national anthem: ‘Maybe you shouldn’t be in this country’

“The principal doesn’t offer me any type of comfort. He doesn’t say I’m gonna get someone here to counsel Malachi to let him know that everything she said is a lie. I think they’re trying to sweep this under the rug,” Foster said.

But she said two days after the incident, the school district’s assistant superintendent told her the teacher was put on leave. A spokesperson for the Shawnee Mission Schools did not confirm this to WDAF, however, and said it was being dealt with internally.

“Our investigation is complete. It’s a personnel matter, and by federal law we cannot discuss any disciplinary decisions taken against a teacher or employee,” Shawna Samuel, the director of communications, said.

Since the incident, Malachi has moved on to another school. “I’m just trying to move on from what she said,” the 10-year-old said. Meanwhile, his mother says she is considering homeschooling.