It’s not often you hear of news about people from Mali that reaches the States, but in this case, the story of one young man is making people smile across the world.

Mamoudou Gassama is being called the “Spiderman of Paris” after his heroic act of climbing up four stories of an apartment building to rescue a dangling child. The Malian migrant has now been given honorary French citizen by French President Emmanuel Macron as a result of his bravery, reports CNN.

It was a jaw-dropping feat captured on video that went viral and also captured the hearts of onlookers who were stunned as they watched in awe, but their senses were probably tingling with appreciation.

The 22-year-old had only been in the country for a few months and was living in a hostel for migrants. Not only has he been made a naturalized citizen by President Macron, but Gassama was offered a job by the local fire brigade. Sounds like Gassama will be putting those scaling skills to good use. 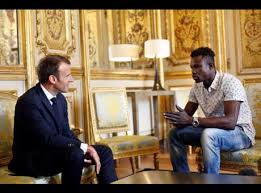 Gassama told Macron: “I didn’t think about it, I climbed up and God helped me.”

Gassama met with the French president at the Elysee Palace on Monday morning and was given a medal for saving the four-year-old.

“When I took him in my arms, I spoke with him and asked: ‘Why did you do that?’ But he did not answer,” said Gassama of the little boy he saved.

READ MORE: Black tourists kicked out of KFC for being ‘too loud’

Paris Mayor Anne Hidalgo also congratulated Gassama and dubbed him the “Spiderman of the 18th” which is the city district where he saved the toddler.

“Congratulations to Mamoudou Gassama for his act of bravery that saved the life of a child.”

And what a lucky break for the baby having Gassama there with the brawn to get the job done.

“Luckily, there was someone who was physically fit and who had the courage to go and get the child,” a spokesman for the fire service said.

The parents were questioned for leaving the toddler alone at home in the apartment. The mother was out of town while the father went out shopping, according to reports. The child has been placed in state care.

Check out the video for yourself.