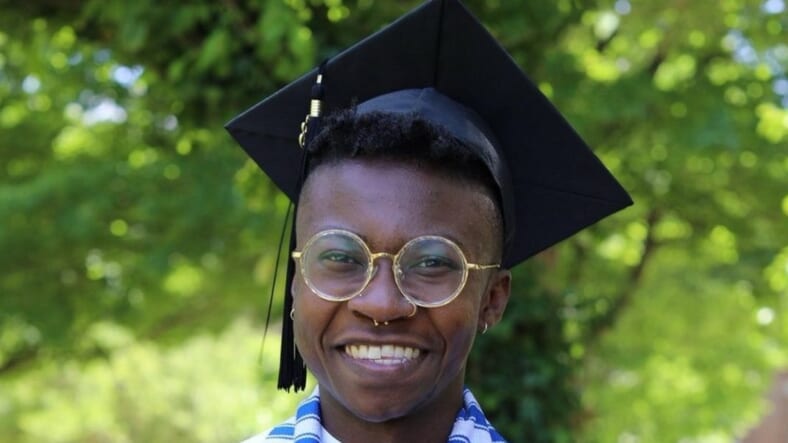 Keo Chadd O’neal made history last month when he became the first transgender man to graduate from Spelman College. The traditionally all-girls school changed its policy in 2017—opening up its enrollment to transgender women as well as allowing women who transition while enrolled to continue their education at the school.

Keo, a native of South Plainfield, NJ and history major wasn’t seeking to be a “first.” Like thousands of other college students across the country, he was simply trying to find his truth and live in it. Grio contributor George M. Johnson recently had the opportunity to speak with Keo about gender politics in the Black community, navigating campus life as a trans man at a women’s college, and how legendary author Alice Walker impacted his life.

theGrio: Keo Chaad is such a unique name. How did you come up with that?

Keo Chadd O’neal:  I remember choosing the name Keo a couple says before the 2016 election. I was sitting with my friends who both happened to be trans and we were picking new first names for two of us. In my birth name, my initials are K.C. Which is also the same as my brothers who is 11 months older than I am. I didn’t want to mess that up, so I wanted a K and a C name. We went through lists of names and I found and Keo just stuck.  It’s Hebrew for “God will increase.”

Chaad means “Warrior” in an African language. I thought it was perfect. The way I see it, my name means “God will increase the warrior.”

theGrio: At one time you identified as non-binary and now you use pronouns he/him/his. Can you tell us about your decision in using those pronouns?

KCO: I first identified as non-binary, so my pronouns were they/them and it took a while for me to come to the decision of he/him. After tons of talking and explaining how I felt, my friends kind of just jumped on to calling me by he/him pronouns.

theGrio: How have your different identities been received in the Black community?

KCO: It was nearly impossible to get Black folks to understand non-binary identification. Black people believe in what is concrete, what is tangible for them and the idea of someone existing outside of the binary was not something they could handle. Black folks believe you are a girl or a boy and there is no in between and if you choose some sort of in between, you were just confused.

theGrio: How did you arrive at your decision to attend Spelman and what was that experience like for you to exist on that campus?

KCO: I transferred from a PWI to Spelman during my sophomore year. Spelman was the only HBCU I had on my radar. I never wanted to attend an HBCU, but my mom insisted that I visit Spelman after I had gotten accepted.

At first it was very hard to exist on Spelman’s campus. Before I started T (testosterone) and I didn’t really pass, everyone would mistake me for a girl and I’d have to explain that yes, I went to Spelman but no, I’m not a girl. And I’d have to continuously out myself. Also, my name wasn’t legally changed, and my birth name is super feminine, so I’d have to explain that I don’t go by that name but another one instead. Almost every professor I know addresses the class as “ladies” which made me feel super small and invisible.

theGrio: So, you came out at during a convocation for Spelman alumna and author Alice Walker, who was visiting as an artist in residence. What did she say to you?

KCO: She gave me her support. Having Alice Walker’s support means everything to me and to get it in front of my entire school meant even more. To have a Black icon say that she believes in me and what I could do really made me feel invincible for a while. She gave me the confidence I needed to push myself a little further and to speak up a little more.

theGrio: What kind of reaction did you get after coming out at Spelman as a trans man?

KCO: After I came out at the convocation, everyone took to Twitter sharing their opinions about me going to Spelman as a trans man. A lot of people believed that Spelman shouldn’t be “accommodating” to me and they’re uncomfortable with the idea of a trans man on campus but there also lots of words of encouragement. Our dean of students stood by me and supported me and made sure I didn’t feed into what people were saying and my friends and other supporters defended me online. It was important to know that I still had people in my corner.

Some people think that I’m at Spelman to ruin its mission or that I’m some type of ploy for the school which is very confusing to me. I’m just a kid trying to go to school.

theGrio: What do you hope people learn from your story?

KCO: I hope that people learn that different does not mean bad and to learn to embrace these differences. I also want people to see that trans men can exist at women’s colleges, that it’s almost a necessity that we be there for our safety. I want other trans guys who may or may not have transitioned to know that it does get easier and it does get better. Things will not always be as hard as they are now.

theGrio: What’s next for Keo?

KCO: Ultimately, I want to be a professor, but I’m putting off grad school for at least a year. As far as the short term, I plan to find a job. I want to stay in the same sector of LGBTQIA+ nonprofit organizations and I’m not opposed to museum work or really anything historical in DC. I do think though that I need to have a little hiatus on school for a while. Tired is not even the word to describe how I feel after the last four years.