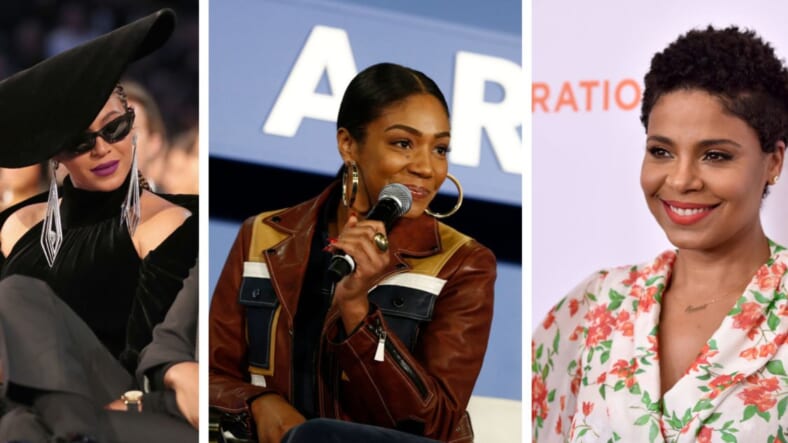 If there’s one thing Tiffany Haddish knows how to do, it’s stay in the news with Beyoncé rumors. This time the Girls Trip breakout star is confirming to the Hollywood Reporter that Sanaa Lathan‘s family is upset with her about the #WhoBitBeyoncé fiasco she started a few months ago.

Haddish claimed in several interviews that when she was at a star-studded after-party late last year, an actress (whom she refused to name) bit Beyoncé in the face. She was ready to fight the unidentified actress, but said Bey calmed her down and said not to worry about it because said actress was high on drugs.

That bit of gossip threw the internet into a tizzy. Many publications and individuals donned Sherlock Holmes caps trying to find out what drugged up actress had the gall to bite Queen Bey.

For a number of reasons, several people kept landing on Sanaa Lathan as the culprit. Lathan has flatly denied this on her own social media and in interviews. Haddish has never really confirmed the identity of the biter and many still wonder if the incident happened at all. Beyonce’s step-father Richard Lawson said the whole story is bogus and nobody every bit Jay-Z‘s wife’s face.

Not Yes, But Not No Either

Fast forward to this current interview with the Hollywood Reporter and Haddish is still playing coy about #WhoBitBeyoncé, but allows herself to dwell on the Lathan family.

Read this excerpt from the interview and see how deftly Haddish manages to never actually say that it was Sanaa Lathan:

Haddish asks whether I know who did it, and I whisper the name that’s been rumored: Sanaa Lathan. She smiles. “I’m super good friends with her stepmom and her dad [Stan, a producer-director], and they were mad at me,” she reveals. “They were like, ‘Why would you do this to the family? You know, black actresses, you guys have to stick together, it’s so hard for you guys to get work as it is, why would you try to ruin her career?’ But I didn’t try to ruin her career. I never said her name! I was just trying to say how Beyonce kept me from goin’ to jail that night. I coulda just shut my whole career down.”

If you read that closely, Haddish never says it was Lathan. She simply acknowledges that Lathan’s family was mad at her and she once again underscores the fact that she never directly put Lathan in the controversy. That is true. It was others who proffered Lathan’s name, but on the other hand, Haddish hasn’t said “No, it wasn’t her!” either, which is a little odd considering she says she’s so close to the family.

Having the shadow of a possible violent act against a beloved superstar can’t be easy, especially when coupled with the drug use allegation.

For her part, Haddish claims that instead of becoming a social pariah after the #WhoBitBeyoncé hoopla, she has actually been invited to more parties than ever.