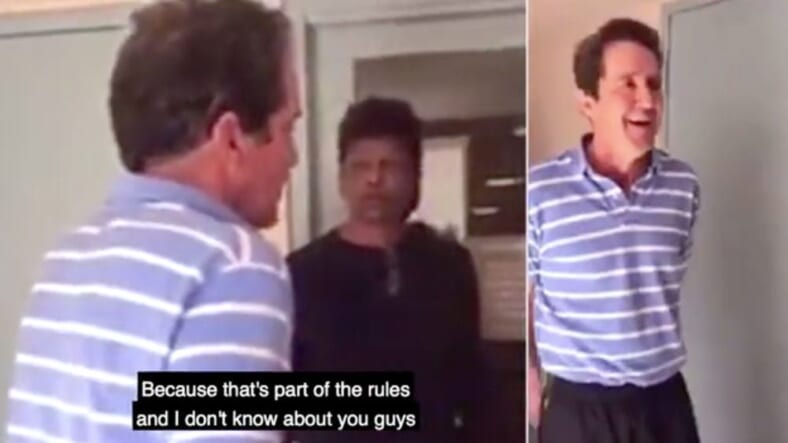 A white man who thought he was the pool police approached a black family swimming at a California hotel, harassed them and suggested they were possibly polluting the water with diseases, the NY Daily News reports.

Mom Carle Wheeler whipped out her cell phone and recorded the interaction with the man who claimed he was a health inspector and went into a racist rant about their hygiene at the The Westin Hotel in Pasadena, she wrote on Facebook.

While there clearly were other people posted up at the pool chilling, Wheeler’s Black family apparently stood out. Wheeler said the nosey man questioned her about whether her 5-year-old had washed her body before taking a dip in the pool and he then proceeded to interrogate them.

“I simply asked them if they’d showered. I’m sorry,” the offensive man says in the video. “I’m tired of getting in pools people consider baths.

“Google it. Google the diseases in pools.”

Hotel staffers told the man to leave the premises, the footage shows.

Wheeler says the hotel needed to do more to identify the man and ban him from the property to keep him from bothering other guests.

“No follow up had been made by anyone from the Westin Hotel since,” she wrote Wednesday.

“In light of these events that happened, we feel it is important to share that we do not condone comments or behavior directed to our pool guests. The safety and security of our guests is our top priority. We strive to maintain an environment where our guests feel welcome and are treated with equal respect and attention from our team.”

“Pool Paul” must be related to “Pool Patty” who called the police on Black folks chilling at the pool because they didn’t want to be bothered with her.

A video, uploaded by Facebook user Serenity Jackson, shows the white woman upset after asking a Black woman to talk to her because she was “depressed.” When the Black woman declined her offer, Patty called the police in hopes that they would side with her foolishness and arrest the group of Black people “taking over” the pool.

Then there was BBQ Becky”  the white woman Jennifer Schulte who called the cops on some BBQing Black folks in Oakland, became one of the most memorable meme’s of the year and a reminder to white folks everywhere to mind their own business.