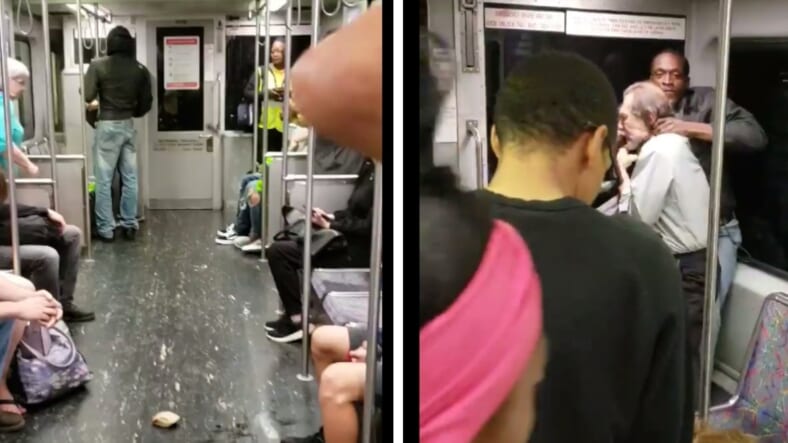 Several Facebook and Twitter users are coming to the defense of a Black man facing assault charges after he apparently stopped an elderly white man accused of taking inappropriate photos on his phone.

Prosecutors say 31-year-old Tukan Manley beat a 66-year-old man on a Red Line train in Boston on Monday after a woman alleged the elderly man took pictures of her, according to multiple reports. The man told police he didn’t take any inappropriate photos and claimed that Manley approached him, unprovoked, grabbed his phone and walked away.

The man says he followed Manley and asked for his phone back, but police said Manley began to “physically beat, choke, and kick the victim.” But in a four-minute video posted Monday by Keda Payton on Facebook, the elderly man is seen first hitting Manley, who then is seen retaliating.

“Don’t let him escape, don’t let him go nowhere,” said one passenger about the elderly man on the video. Another passenger called the man, “a perv,” and told a train official that the man should be arrested. And a third, said the man was “lucky.”

However, police arrested Manley Thursday and charged him with assault and battery on an elderly person, strangulation and malicious destruction of property. Transit Police Superintendent Richard Sullivan told the Boston Globe that police found “no evidence” on the man’s phone that he was taking inappropriate photos.

Manley’s arrest came despite many taking to social media to say that police took the wrong person into custody. One Twitter user,  @ChrisCeaser in a thread Friday wondered if race played a role and if the media rushed to judgment based on the police’s initial account.

“Witnesses there said the man actually attacked another woman on the train who was confronting him about his creepy behavior, prompting this guy to intervene”  he tweeted. “it was especially brave of this man to step up, knowing full well that the color of skin could come back to bite him in the ass on this. thankfully someone was recording, but him being arrested is already bullshit and a massive violation imho.”

hey @boston25, great fucking headline about the black guy who got arrested after confronting a sexual predator on the MBTA.

it was especially brave of this man to step up, knowing full well that the color of skin could come back to bite him in the ass on this. thankfully someone was recording, but him being arrested is already bullshit and a massive violation imho

One TV station tweeted they are following up the story.