You do not have to live in a border state to make a difference. 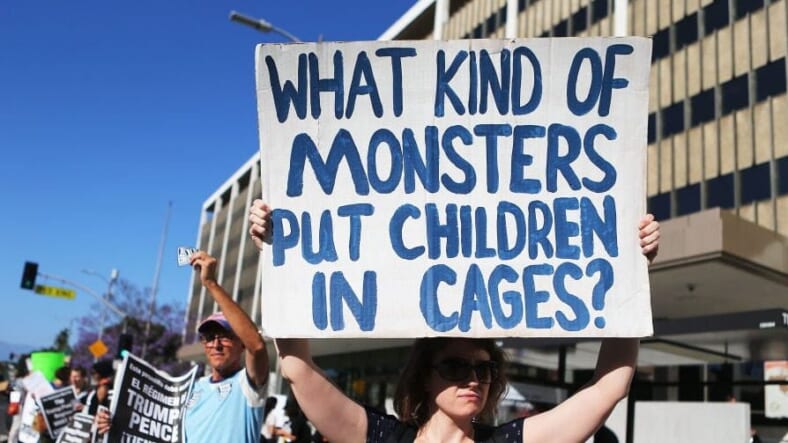 LOS ANGELES, CA - JUNE 18: Protestors demonstrate against the separation of migrant children from their families in front of the Federal Building on June 18, 2018 in Los Angeles, California. U.S. Immigration and Customs Enforcement arrested 162 undocumented immigrants last week during a three-day operation in Los Angeles and surrounding areas. (Photo by Mario Tama/Getty Images)

In 2018 the Trump administration announced a “zero tolerance” policy that seeks to criminally charge those who cross (or attempt to cross) the U.S. border without documentation.

As a result of that policy being enforced, nearly 2,000 migrant children have been separated from their detained parents and are being held in “temporary shelters,” which many critics have been quite accurately referred to as “prison camps.”

READ MORE: Immigrant children cry and plead in terror as they are taken from their parents at the U.S.-Mexico border

“I live in a border state,” she wrote in a Washington Post op-ed on Father’s Day. “I appreciate the need to enforce and protect our international boundaries, but this zero-tolerance policy is cruel. It is immoral. And it breaks my heart.”

Bush has gotten support from both sides of the aisle on this issue, including from fellow former First Lady Michelle Obama.

Individual citizens might feel helpless and overwhelmed by the sheer magnitude of this issue, but there are practical and substantive ways to join the fight on the ground, even if you’re not in a border state. Below are five ways you can do your part to push against the Trump administration’s inhumane treatment of children taken from families seeking asylum.

Many organizations in border states are very actively looking for volunteers willing to complete tasks like organizing legal intake and interviewing families, especially if those volunteers are Spanish-speaking and/or have some sort of legal experience.

The Texas Civil Rights Project, for example, is seeking “volunteers who speak Spanish, Mam, Q’eqchi’ or K’iche’ and have paralegal or legal assistant experience.”

The Refugee and Immigrant Center for Education and Legal Services (RAICES) also has a volunteer page where you can apply to become an intern.

RAICES is also seeking people to volunteer for their Accompaniment Program, where “allied individuals, organizations, and congregations provide solidarity to individuals facing deportation or contact with immigration officials for which they would like support.”

Donate to orgs helping the children and their families

For those who don’t live in southern states or meet the qualifications for volunteering, a simple way to help is by donating to organizations involved in this fight.

A great place to start is ActBlue’s initiative to Support Kids At The Border. The funds they raise are split among eight organizations, including the ACLU.

If you are looking to support individual agencies, below is a list to get you started.

On June 14, The Families Belong Together network held over 60 events across America, with thousands of people standing up for migrant children and their families.

But if there’s no local event happening near you, you can always organize your own march or rally. Get a group of your friends together, make some signs, spread the word, and hit the streets.

Your elected officials were hired to speak on your behalf, and situations like this are the perfect time to remind them of that.

You can also download an app like Resistbot, which allows you to write a letter to representatives from your phone, and there’s 5Calls, which provides phone numbers and scripts for calling representatives.

In this day and age we’ve all seen the power of digital activism and how increased visibility not only creates awareness, but also helps solicit resources and put pressure on elected officials.

However, given the breakneck pace of the 24-hour news cycle, it’s easy for causes you care about to get buried under a pile of memes and viral videos. Which is why it’s important to post about social justice stories in reasonable intervals, share information on social media and remind your friends that this is STILL happening.

Just be sure to avoid hoaxes and fake news stories meant to serve as propaganda.

One couple that serves as a great example of how to do this is John Legend and Chrissy Teigen, who regularly champion causes they’re passionate about in between pictures of red carpet events and tender family moments.