The actress is amazing in Season 2 of the Netflix series. 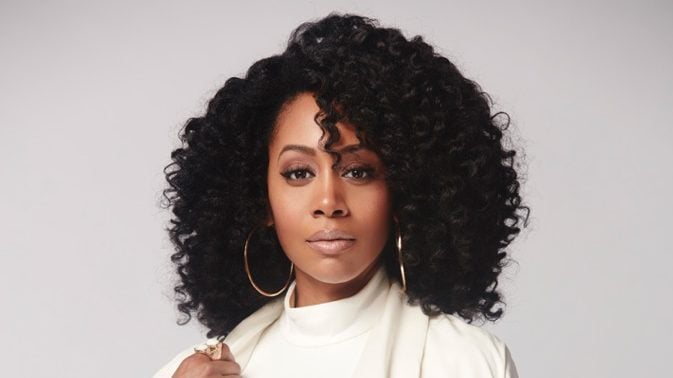 Luke Cage is finally back for a second season on Netflix and this time around, the women on the series are stepping up in major ways.

We caught up with actress Simone Missick to find out how she mastered the role of Misty Knight, one of Marvel’s first black, female superheroes and learned she’s just as inspired by her dynamic performance as we are.

The actress is keenly aware of just how important her character is to our culture, but she’s still wrapping her mind around the impact she stands to have.

“It’s one of those things that you never grasp the importance of. You think about Nichelle Nichols (Star Trek) and did she really know that decades after her character was first created, the impact that she would have? That was in 1966 that character came to the screen. It has since been reimagined by Zoe Saldana but I think about that often.  Thirty or forty years from now, someone will be playing Misty Knight and this character will live on and people will always remember the first one,” she says. “That’s tremendous and it’s also so important to think about this woman who was created during a time when we literally had zero black female superheroes and she was the first one they put to paper. It’s such an honor to be able to breathe life into this woman who took 40+ years for fans to hear her speak. It’s amazing. I feel like I’m building a legacy that my children and their children can be proud of.”

Misty Knight isn’t the only ground-breaking woman the series, and Missick explained that showrunner, Cheo Coker, was the perfect person to deliver such a wide range of representations of black women in one place.

“I think that Cheo loves black women and he makes a point to show black women in the way he grew up seeing them. Empowered, intelligent, capable, multi-faceted. For him to really explore Alfre Woodard’s character as a sexual being in a relationship with a younger man this season is a beautiful thing to see,” she explains. “It’s important for the world to see black women as not just the suffering wife or haggard mother. Yes, we are those things sometimes but no one is all those things at once. You still have sex, you still cry, you still laugh, have rage and anger; to see all these different shades of women physically and emotionally represented on a show and to be a part of that show makes me so happy.”

Simone Missick seems like she was born to play Misty Knight, but she admits the role comes with its own set of pressures.

“There’s a responsibility to get it right. To be authentic; to not be a caricature of an idea or person but to be a three-dimensional person and human being. When you work with someone like Cheo as a creator who is so dedicated, and the dedicated writing team, and Netflix and Marvel who are dedicated to getting it right, it’s a lot of pressure. Sometimes we don’t get it right. There is a responsibility to the fans who have been waiting so long as well as the original creators of the comic book. I feel like I’m keeping up as best I can,” she explains.

“The current rise of the black superhero in Hollywood also adds pressure. On the film side, you had Anthony Mackie’s character in Captain America and Halle Barry’s character in the X-Men franchise. Those characters were there but didn’t tell those super hero stories. To have thirteen episodes of television centered around people of color and showing all of our frailty, our strength, our light and our darkness, we knew that we had something special. Still, I never imagined that the popularity of Luke Cage would make Marvel hurry up and realize that it’s time to put Black Panther out.”

While Luke Cage set the bar for what it would take for a Black comic series to resonate with the mainstream, Missick acknowledges that the collective force of multiple projects is adding momentum and propelling the movement toward representation forward.

“These creators have been looking to tell these stories for a long time but no one was listening and I’m just so thankful that we do have Black Lightning and we have Valkyrie in Thor and all of these characters from Black Panther that kids can dress up as for Halloween,” she says. “People are thirsty to see themselves a magical way and in a fantastical way. People of color dream and imagine and play just as much as anyone else but we live in a world that just did not make that available. It’s a beautiful thing to know my nieces and nephews can grow up in a world where they see themselves celebrated in this form.”

Missick is just as excited as all of us that we’re seeing more black faces in these kinds of roles, but when sed what’s responsible for the sudden shift in Hollywood, she’s quick to respond.

“Money. It is financially viable. For so long, a buying, consuming population has been ignored and forced to see stories that do not reflect them or their views. Money talks. It was the success of Luke Cage and the success of Black Panther that I think has people going, ‘Oh, OK. Yes. I’ll buy that.’ I think it’s all financial,” she says.

“It also has to do with the creators wanting to tell these stories being in a position where they can make decisions. We have two writers from Season one who are black and female who have left the writer’s room to go off and run their own shows. That happened because of the success of season one. We have so many women of colors who are directing now and that happens because you have a show runner who is committed to bringing women to the table where before, all of season one, there was not a single female director. It comes from people being aware and people realizing its something they need to get behind.”

In Season two of Luke Cage fans will get to see a whole new side of Misty Knight now that she’s becoming a bonafide super hero and we couldn’t wait to find out how Missick prepared for the physical demands of the role.

“It was a tough road, especially in terms of the arm. It was a process before we got to the arm that Misty has now. It was physically demanding even after she got the prosthetic arm. It took a while to get to a place where it was OK. I remember when we did the first camera test with the arm, there were 50 people standing around the stage and I’m like, ‘Guys, this is really uncomfortable. This hurts.’ They put everything on and I was like…My arm does not move.’ They had to go through several different editions of this arm to get it to working order,” she admits.

“The real gift of season two is getting to finally do the fights. I was really excited to get to the training facility with our fight coordinator. He and I would get in there and he was trying to get me to remember this choreography and I had never done stunts before. I was so looking forward to it and it was very demanding. You work on set all day and then get up early for fight training so when you’re able to execute these moves, it feels great.”

Aside from stunt training, Missick sought out other forms of training to prep for the epic fight scenes we’ll see this season.

“It’s so fun. To be able to whoop somebody’s a** is such a great feeling. I have to keep remembering that I only know how to kick somebody’s a** for TV. As much as I feel like a bad a** on set, I do recognize that I can’t really fight.”

Season two of Luke Cage is streaming now on Netflix.