Maxine Waters fights back after death threats: “If you shoot me you better shoot straight” 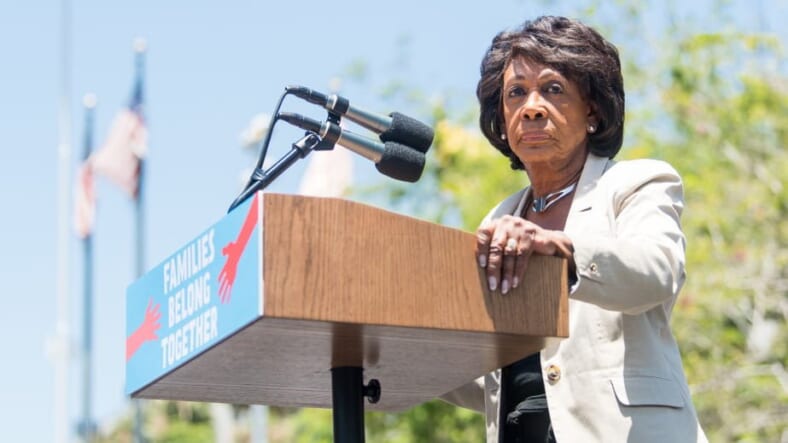 Time’s up for the haters who have threatened Rep. Maxine Waters.

The fiery Congresswoman is fired up and fighting back, launching a scorching clapback against Donald Trump while shaking a fist at those who made threats against her life urging them to “shoot straight” at an immigration rally on Saturday, reports The Hill.

“All I have to say is this, if you shoot me you better shoot straight, there’s nothing like a wounded animal.”

Waters has been the target of vicious threats on her life after Trump targeted her online following her speech to supporters urging them to confront members of his administration over his racist policies.

Waters cancelled several speaking engagements—one in Texas and one in Alabama—after a “very serious death threat” was made against her.

But the California Democrat showed face at the rally and didn’t back down while supporting the “Families Belong Together” event.

“How dare you take the babies from their mother’s arms,” Waters said at the rally.

“You should be ashamed. We want out children connected back to their parents.”

“I am prepared to make whatever sacrifices they are needed to be made. I am not about to let this country go by the way of Donald Trump,” she declared.

At issue are Waters’ earlier comments when she urged her supporters to be vigilant and address members of Trump’s cabinet at every opportunity.

“Let’s make sure we show up, wherever we have to show up,” she told attendees in Los Angeles.

“If you see anybody from that cabinet in a restaurant, in a department store, at a gasoline station, you get out and you cause a crowd, and you push back on them, and you tell them they’re not welcome—anymore, anywhere—we’ve got to get the children connected to their parents, the children are suffering.”

This happened recently to Sarah Sanders when the Press Secretary and her husband were kicked out of Virginia Restaurant, the Red Hen, and told they were not welcomed to eat there.

President Trump took to Twitter to take an unprecedented and unpresidential swipe at Waters.

“Congresswoman Maxine Waters, an extraordinarily low IQ person, has become, together with Nancy Pelosi, the Face of the Democrat Party. She has just called for harm to supporters, of which there are many, of the Make America Great Again movement. Be careful what you wish for Max!”

Since then Waters have gotten numerous death threats. But she’s got time to deal with Trump.

“Impeach 45!” she yelled at Saturday’s rally.