Getting there is half the fun: 10 family friendly trips to enjoy by train this summer

Leslie Gordon
Family friendly train trips will allow you to sit back and relax as you travel to new places. (Courtesy of Fotolio)

What if we told you there was a way to have a worry-free family adventure this summer? Well, it’s true and you can do it by riding with Amtrak !

Whether you engage your kids in the oral traditional of family storytelling or squad up and break out the deck of cards for a mean game of Spades, this is your opportunity to create new lasting memories. If you prefer a simpler approach, put your phone on vibrate, stick it in your backpack and live in the present as you gaze out onto the country’s beautiful landscapes. Take a moment to take it all in. After all, the journey is just as worthwhile as the destination.

We found 10 family-friendly train trips you can take by train that will allow you to sit back and relax as you travel to exhilarating new places that are the cornerstone of our great country. 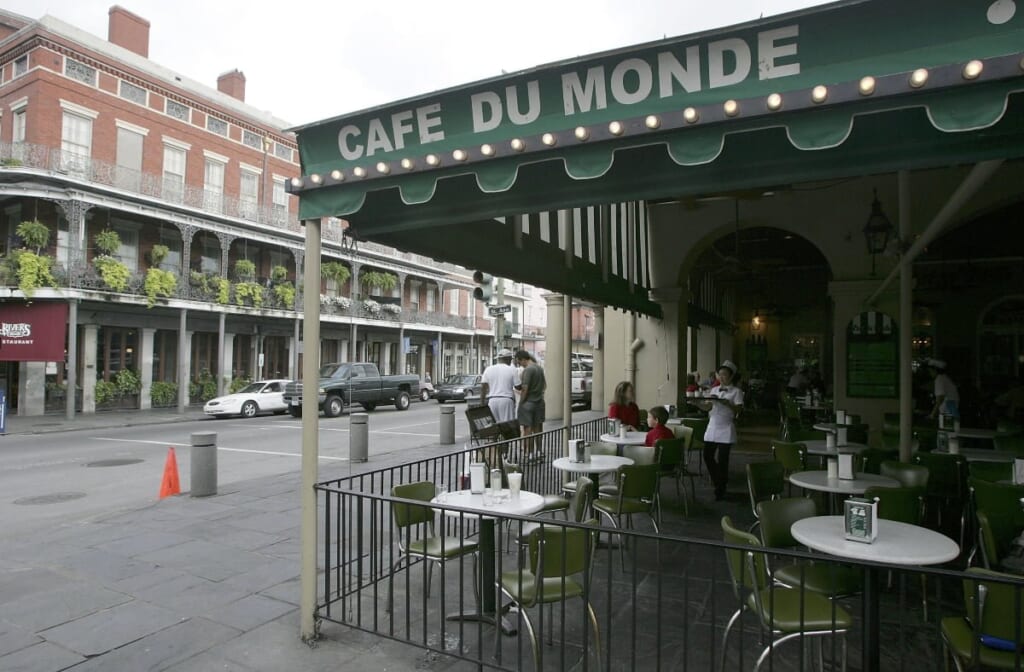 Pack up the family and board the Crescent Amtrak train to New Orleans where you’ll share in the excitement of arguably the richest musical and culinary heritage in the South. Relax on your way there or plot out your family’s immersion into the sights, sounds and tastes of what folks used to call, “The Paris of the South.”

Once you arrive, your family may be surprised to encounter a Second Line brass band parading down the infamous Bourbon Street. Visit the Audubon Zoo, the Louisiana Children’s Museum or Jazz National Historical Park. Stop by the legendary Cafe DuMonde to taste their world-famous beignets or check out Heard Dat Kitchen on Felicity Street to get your soul food on. There’s a world of culture and culinary delight awaiting your family in the Big Easy. 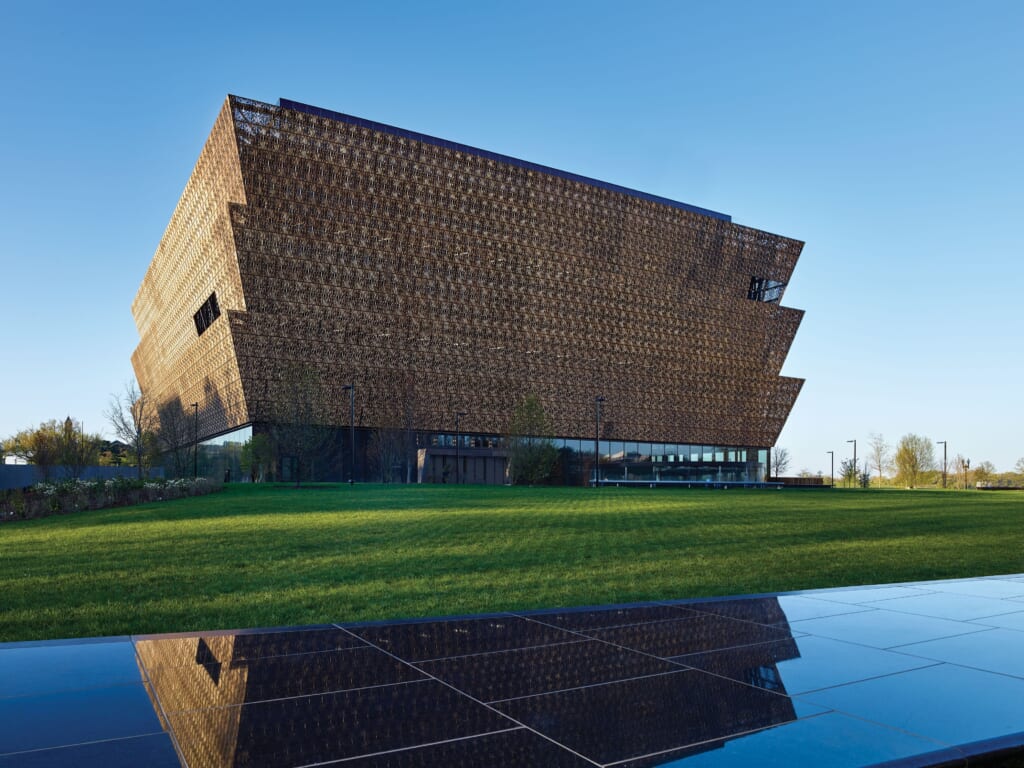 From the moment the train pulls into D.C.’s Union Station on Massachusetts Avenue, just blocks from the U.S. Capitol, your family will be buzzing with excitement in anticipation of all that lies in store.

There’s so much to see and do, and places to explore in the nation’s capital. Swing by Howard University to introduce your kids to one of the country’s most prominent historically black colleges (HBCU), and by all means secure tickets in advance to the magnificent Smithsonian National Museum of African American History & Culture (NAAMHC). Gaze in solemn remembrance and reflection at the Martin Luther King, Jr. Memorial and if you travel in July or August, you can catch The Color Purple at the Kennedy Center. 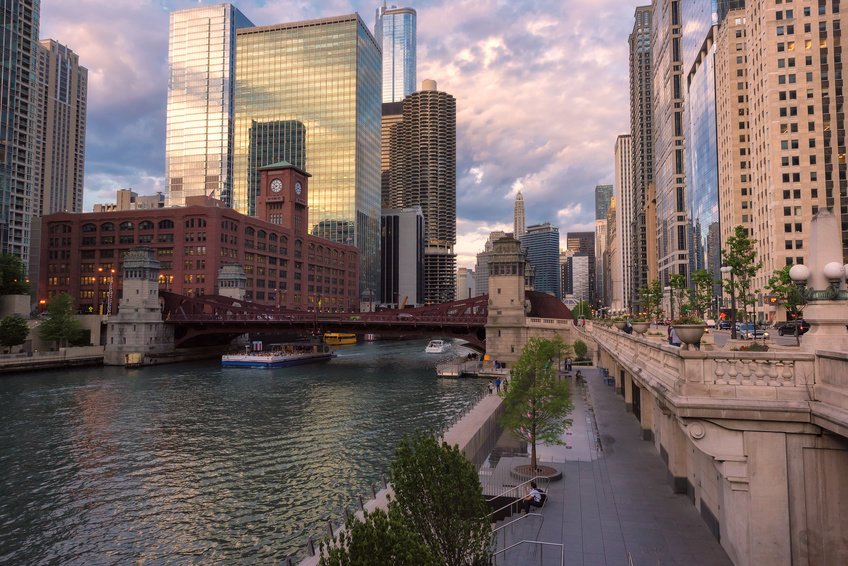 A relaxing train ride to Chicago will give your family time and space to unwind from the demands of the busy school year. As the train pulls into the iconic Union Station on South Canal street, you’ll immediately appreciate the masterful architecture that downtown Chicago has to offer. Visit the DuSable Museum of African American History, the Museum of Science & Industry on the city’s South side (where you may in fact run into the Obamas) or catch a family-friendly performance at one of over 200 Chicago theaters.

Whether your family is interested in tasting the famed Harold’s Fried Chicken (four piece, mild sauce with sauce on the fries, please) or dining at one of the city’s many Michelin-star restaurants, there is so much to see, do and taste in the Windy City. And don’t forget to check out the Taste of Chicago in July), the world’s largest food festival, before boarding your train back home. Chicago never disappoints. 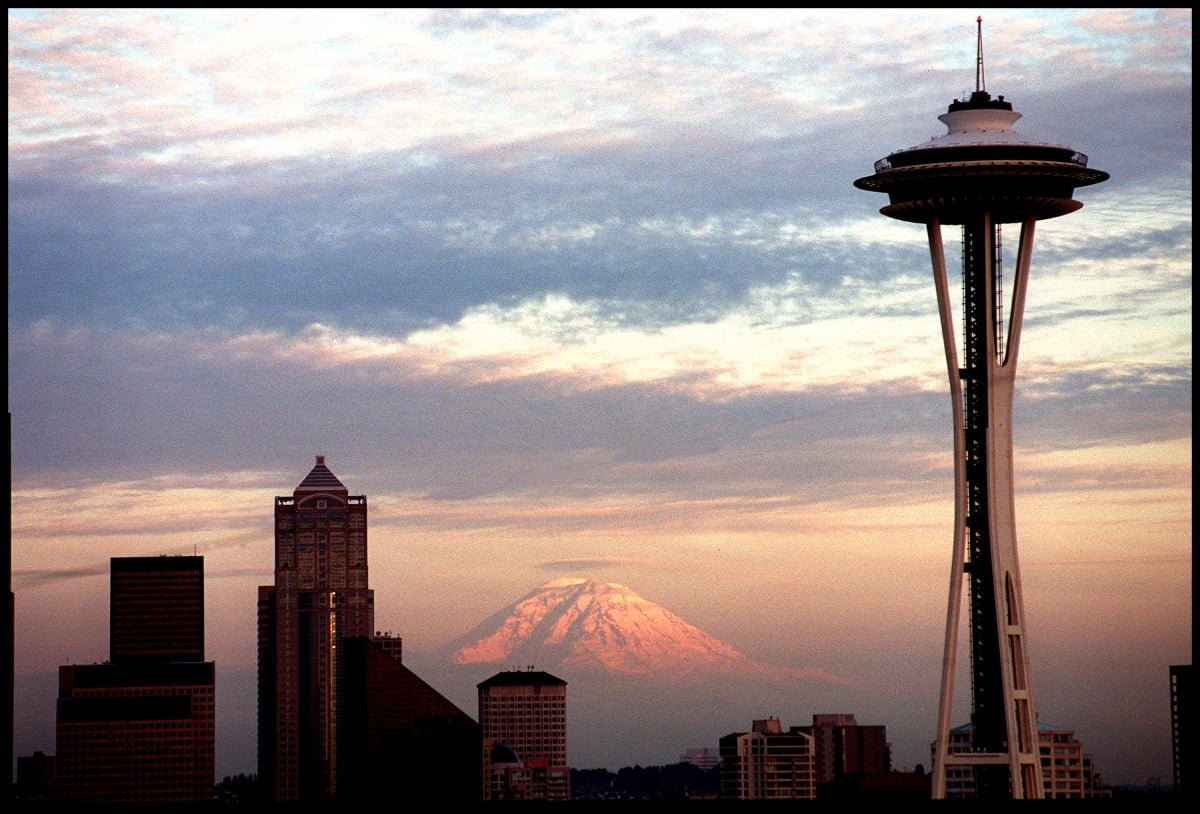 The Seattle Space Needle during dusk with Mt. Rainier in the background. (Photo by Dan Callister/Newsmakers)

Starting in Los Angeles, traveling through Portland and then to Seattle, the Coast Starlight Amtrak train will provide you and your family with miles of magnificent scenery, almost like a moving postcard.

Widely regarded as one of the most spectacular of all train routes, this route journeys through the magnificent cliffs along the Pacific Coast Highway, Mount Shasta, the San Francisco Bay, Oregon’s Cascade mountains, Mount Rainier, and Puget Sound. When you arrive in Seattle, plan to visit the Seattle Space Needle, take a Puget Sound boat tour or visit the Northwest African American Museum to learn about the history and culture of African Americans in the Pacific Northwest. Your family can also check out Seattle’s Umoja Fest African Heritage Festival this August. 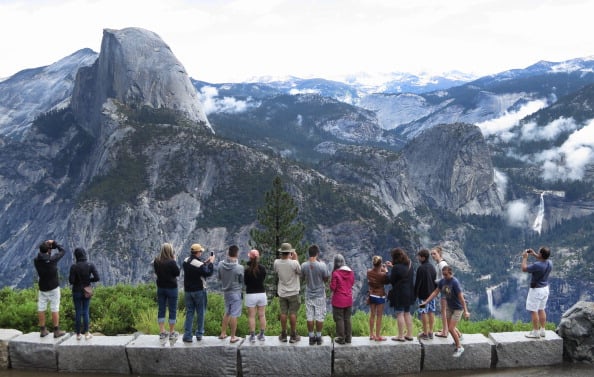 Did you know Buffalo Soldiers, African American army regiments formed after the Civil War, were among the first park rangers in places like Yosemite National Park? A family train trip to Yosemite in California’s Sierra Nevada mountains, provides an epic history lesson on the contributions made by African Americans as the driving force behind American development and innovation (no surprise here).

Hop on the San Joaquins train and transfer to Amtrak’s thruway bus service, which takes you directly into the heart of Yosemite Valley’s pristine natural beauty.

It also provides some of the best hiking trails in the country and of course you’ll marvel at the awe-inspiring giant sequoia trees, the oldest believed to be more than 2,000 years old. Yosemite also boasts the largest waterfall in North America with breathtaking views. 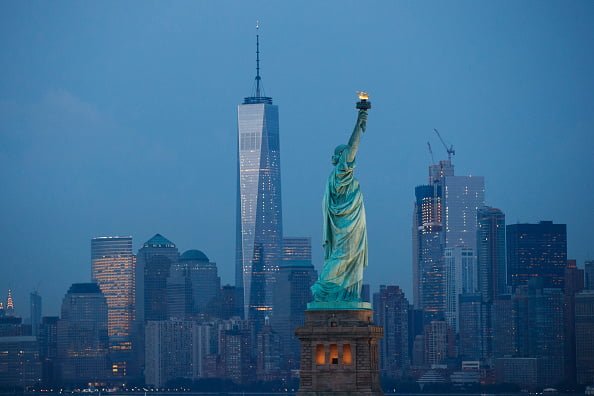 The Statue of Liberty stands in the foreground as Lower Manhattan is viewed at dusk, in New York City. New York City is preparing to mark the 15th anniversary of the September 11 terrorist attacks. (Photo by Drew Angerer/Getty Images)

With so much to explore in New York City, your family adventure can begin the minute you board the train! Whether you’re traveling from the south, the north east or even the mid-west, a journey to the Big Apple is the perfect summer trip for any family who wants to enjoy a fast-paced, high-energy experience.

From the bright lights of Broadway and Times Square to the serenity of the city’s playground, Central Park, get ready to take it all in. Browse the Museum of Modern Art and spend time uptown in Harlem for a deep-dive into African-American culture.

Visit the Studio Museum in Harlem to explore the work of local, national and international artists of African descent. Dine at community favorite, Sylvia’s, on Malcolm X Boulevard for generous helpings of Southern comfort food or stop by Evelyn’s Kitchen, on 118th and 1st Avenue for their famed Banana Pudding Pudgies (listed as one of Gayle King’s favorite things in ‘O’ Magazine). Then head over to Brooklyn to visit MoCADA (the Museum of Contemporary African Diasporan Arts) or the Brooklyn Children’s Museum.

And why not take a waterfront bike tour for an up, close and personal view of this charming, eclectic borough. We’re pretty sure your family will be happy to unwind and chill on the train on any number of routes back home after an exhilarating summer stop in the city that never sleeps. 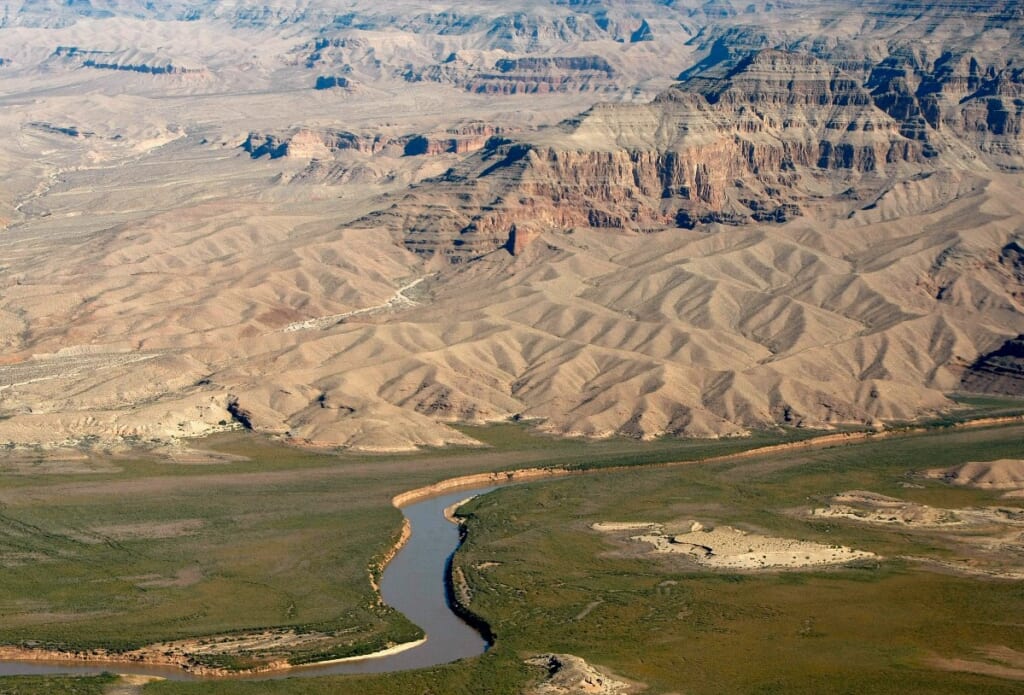 An aerial view near the West Rim of the Grand Canyon, Arizona. (Photo by Ethan Miller/Getty Images)

Visiting the Grand Canyon in Northern Arizona can be an invigorating family adventure unless you decide to drive across country. You’ll likely arrive with you family’s SUV stuck in traffic behind dozens of cars and motor homes.

Instead, take your time and hop on the train and then a no-fuss, dedicated thruway bus to explore the majestic canyon hassle-free and stress-free! Home to unique combinations of geological colors and shapes carved out over millions of years of history, the Grand Canyon (nearly 1,500 m deep) is an iconic American landmark and the most spectacular gorge in the world.

When you get there, take a hike, a helicopter ride or even a river trip around the canyon. The possibilities, and the opportunity to see wildlife (from a distance, please and thank you!) in one of the most breathtaking places in America, are endless. 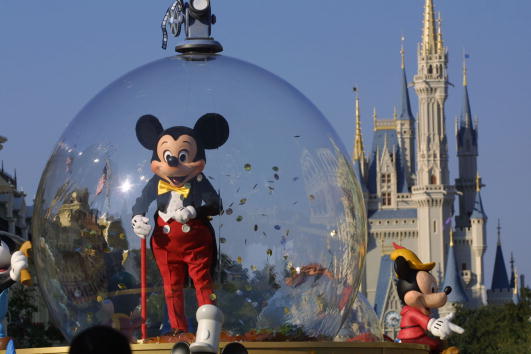 Mickey Mouse rides in a parade through Main Street, USA with Cinderella’s castle in the background at Disney World’s Magic Kingdom in Orlando, Florida. (Photo by Joe Raedle/Getty Images)

What would a smashing family vacation be without a theme park adventure? And, what better way to get to Orlando than by train?

Families from around the country experience a world of adventure in Orlando, home to Walt Disney World Resort—including Magic Kingdom, Epcot and Disney’s Hollywood Studios. Let’s not forget SeaWorld’s Waterpark, Discovery Cove and the area’s enchanting museums and national parks.

But don’t forget that getting there is half the fun. Skip the headache of traveling on I-95 this summer and catch the Silver Service/Palmetto train instead. You’ll want to thank us later.

Scenic, tranquil travel by train is a great way to get from A to B, but if you need the convenience of your car as well, you can take it with you! That’s right, book an auto train, which allows you to pack your car on the train with the rest of your luggage. 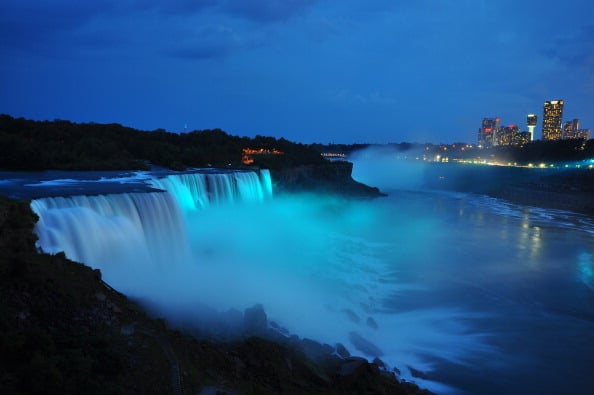 Creating a lifetime of memories when traveling by train allows your family to experience the journey in a way that’s just not possible by air.

A Niagara Falls vacation is the perfect northern destination for your family this summer. Explore all that Niagara Falls has to offer, from jaw-dropping scenery to interactive exhibits and miles of hiking trails in a family-friendly environment.

Catch the Maple Leaf train to take in Niagara Falls from the Ontario side or the New York side and soak up the lush beauty of Hudson River Valley on the way there.

Schedule a boat cruise through the falls, enjoy the summer solstice bike ride along the Niagara Gorge and experience the Niagara fireworks display as your family enjoys dinner overlooking the falls. And don’t forget to pack your Black Card Revoked (family edition) game or your Uno cards for the train trip home! 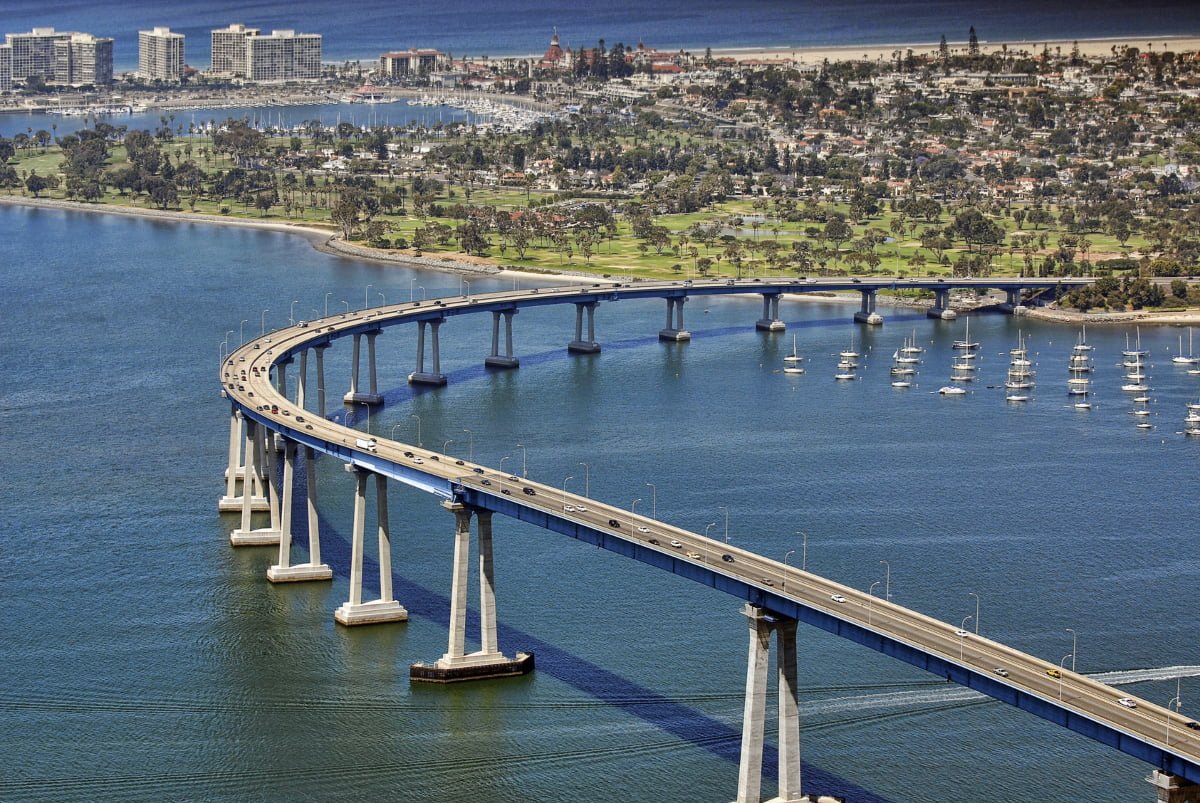 If your family is ready for some serious summer beach action in a locale with nearly perfect weather, an unforgettable train trip to San Diego awaits you.

Grab your swimsuits and beach towels and set out to explore 70 miles of beaches and some of the finest bays in the world. You’ll find an almost endless list of attractions in San Diego with a surprising touch of soul, too!

Your photos from your summer family vacation can finally be Instagram worthy this year just by choosing Amtrak as your travel option. Click here to book early and save up to 25%. Restrictions apply.