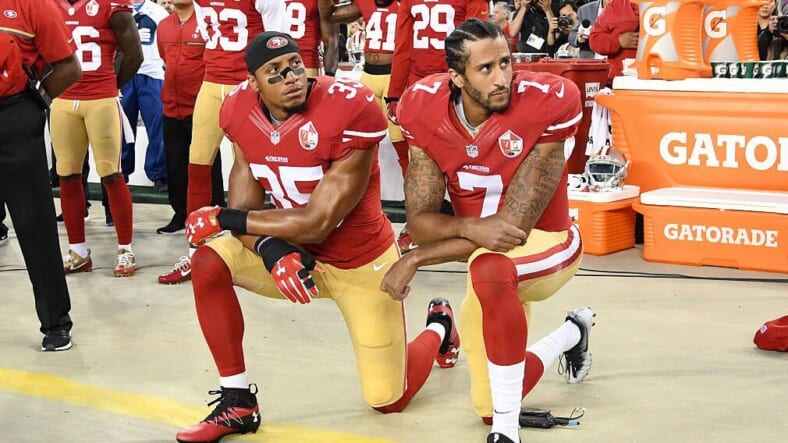 Colin Kaepernick #7 and Eric Reid #35 of the San Francisco 49ers kneel in protest during the national anthem prior to playing the Los Angeles Rams in their NFL game at Levi's Stadium on September 12, 2016 in Santa Clara, California. (Photo by Thearon W. Henderson/Getty Images)

As Facebook cracks down on content they deem to harmful on their platform, a music group called the Wes Cook band slammed the social media platform for censoring their song.

The Nashville country group said they tried to use the paid promotional tools on Facebook but was banned from running an ad for their song “I Stand for the Flag,” which apparently addresses the NFL kneeling protests launched by Colin Kaepernick.

Facebook approved the ad request initially but then cancelled it. Now, after facing backlash from big mad conservatives, Facebook told Fox News they overturned the decision and in fact will allow the ad to run.

“We recently announced anyone running ads about political or other major national issues must include a ‘paid for’ label,” explained a Facebook spokesperson.

“After looking again, we determined that this ad doesn’t need that label. While this is a new policy, and while we won’t ever be perfect, we think knowing who is behind an ad is important, and we’ll continue to work on improving as we roll it out.”

Some of the song lyrics are: “Don’t care if you’re black or white or who you love, I stand for the Flag and the Flag stands for all of us.”

“Our song bleeds unity and love of country. It doesn’t see race, color, religion, or political affiliation,” the band said in a statement provided to Fox News.

“‘I Stand for the Flag’ means I am thankful for the freedoms and opportunities this country gives all citizens, and shows how dependent we all are on each other for the success of our individual American Dream. I believe patriotism is not political.”

Frontman Wes Cook said the song is not divisive as stated in a song line “you ain’t gotta pick a side, you can love your fellow man and still have pride.”

Apparently Wes Cook and company aren’t aware that the NFL protests are designed to address police brutality and the killing of Black people.

In May, the NFL announced that the organization has switched gears and will now require players to stand on the field during the national anthem during take up the option of staying in the locker room, reports ESPN.

“This season, all league and team personnel shall stand and show respect for the flag and the Anthem,” NFL commissioner Roger Goodell said in a statement. “Personnel who choose not to stand for the Anthem may stay in the locker room until after the Anthem has been performed.”

“We believe today’s decision will keep our focus on the game and the extraordinary athletes who play it — and on our fans who enjoy it,” he said.

If players do not follow the NFL’s no kneeling rule, or even sit, they are subject to a fine. That includes, players and team personnel.