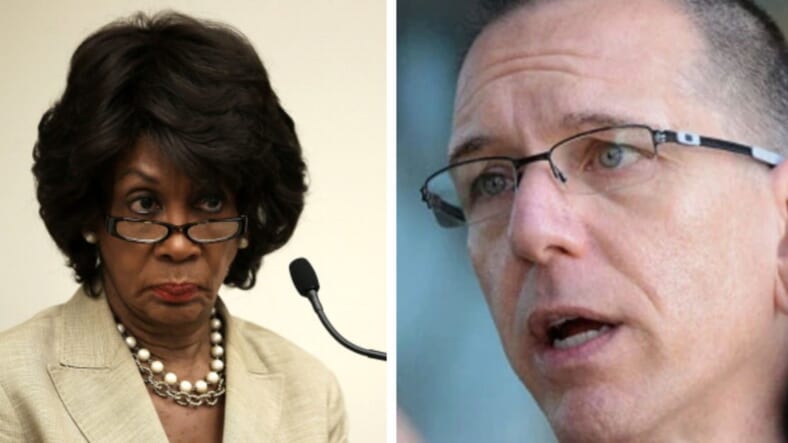 A prosecutor in the San Bernardino County District Attorney’s Office is experiencing a tidal wave of backlash after a series of bigoted posts and comments he made online about First Lady Michelle Obama and Rep. Maxine Waters (D-CA) came to light.

According to The Sun, people are calling for Deputy District Attorney Michael Selyem, whose been part of the DA’s office for 12 years, to be fired over the comments made on Facebook.

The prosecutor who specializes in gang violence, attacked Waters online, writing: “Being a loud-mouthed c*nt in the ghetto you would think someone would have shot this b*tch by now …”

In an online argument with someone over the police shooting of a civilian, Selyem wrote, “That s—bag got exactly what he deserved. … You reap what you sow. And by the way go f— yourself you liberal s—bag.”

And then Selyem posted a photoshopped picture of Michelle Obama holding up a sign saying, “Trump grabbed my penis.”

The DA’s office has allegedly been aware of Selyem’s racially-biased and misogynistic outbursts since late June, and the situation is currently undergoing an internal review.

READ MORE: Tomi Lahren blames Maxine Waters for people telling her about herself in public

Statement from the DA’s Office

Selyem, a 50-year-old resident of Placentia, is the lead attorney in a unit tasked with cracking down on criminal gang activity, in an area where many of those gangs are predominantly Latino.

In what is a clear conflict of interest, one of Selyem’s posts showed a man in a giant sombrero with the words, “Mexican word of the day: Hide.”

In a statement Friday, outgoing District Attorney Mike Ramos said: “We have been made aware of the negative comments and they do not represent the views of the District Attorney’s Office. Since this is a personnel matter I cannot comment any further.”

“It is disgusting that a public official sworn to protect the public would have these ugly viewpoints,” said Zeke Hernandez, president of the Santa Ana League of United Latin American Citizens No. 147. “The district attorney needs to take any and all appropriate action to let the public know that it does not agree with Selyem’s hateful rhetoric.”

“This has gone beyond a simple error in judgment,” he said. “It is clearly outside the boundaries of civil service norms. Law enforcement personnel and officers of the court system should not incite violence.”