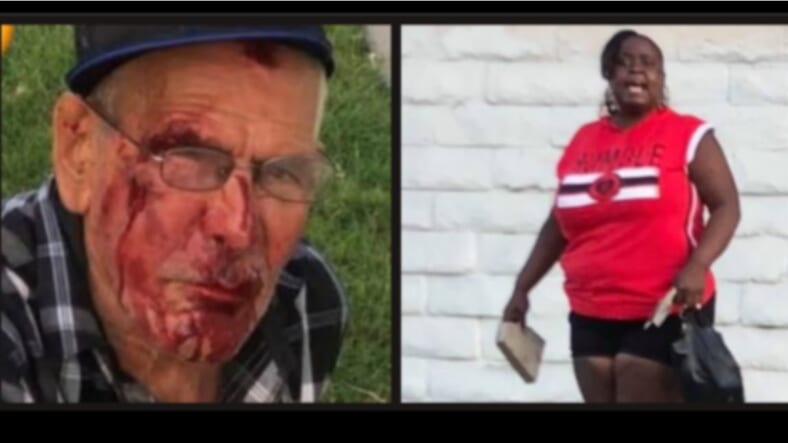 AA video was taken by a witness showing a woman who appears to be African American with a brick in her hand attacking an elderly Mexican man.

A 92-year-old grandfather is in the hospital after a brick-wielding woman and her crew assaulted the man in a brutal attack on the Fourth of July, reports Fox 11 in Los Angeles.

The elderly man, Rodolfo Rodriguez, was visiting from Mexico when a woman lashed out to beat and violently attacked him, according to witnesses. The woman allegedly spewed racist vitriol at the man, such as telling him to go back to his country. A video was taken by a witness showing a woman who appears to be African American with a brick in her hand.

The senseless attack has shocked neighbors.

According to the man’s family, the battered grandfather was walking in the Willowbrook neighborhood when the unprovoked attack happened. He was in fact visiting from Mexico for the Fourth of July holiday. His grandson Erik Mendoza explained that Rodriguez unintentionally bumped the woman’s child when he tried to pass her.

“And when he turned his back they just tossed him on the floor and she started hitting him, and then she grabbed a brick and started hitting him with the brick, and then out of nowhere he saw 3-4 other guys just come rushing and just start stomping on him,” Mendoza explained through a translator to Los Angeles’ Fox 11.

Rodriguez suffered a bloodied and bruised face as well as a broken cheekbone and two broken ribs, reports Fox 11.

Another woman who witnessed the attack took video and snapped pictures of the woman in question.

Detectives from the sheriff’s department interviewed the elderly victim and they are looking for more witnesses. The other suspects were said to be four black men between the ages of 20 and 30.

The family set up a Gofundme page if anyone wants to help.