Can Stacey Abrams use T.I. as her secret weapon in becoming Georgia’s first Black woman governor?

The "Grand Hustle" star could help her with Black voters.

A runoff between Republican contenders Brian Kemp and Casey Cagle, both Trump supporters, on July 24 will determine who Stacey Abrams faces in the November election and her quest to become the first Black and first woman governor of the state of Georgia.

Even though Abrams won the Democratic Georgia primary in May, she isn’t slowing down one bit. In fact, Abrams, who has already made history as the first woman to lead the Georgia General Assembly and the first African American to lead in the House of Representatives, has pushed her efforts into overdrive. That was evident when she took part in a conversation with rapper Tip “T.I.” Harris earlier this week at the posh Black-owned private business club, The Gathering Spot, in Atlanta.

On the outside looking in, how could the King of “Trap Muzik” possibly help the Spelman and Yale grad with her electoral base, but truth be told, T.I. has been politicized for a minute. Most recently, he was a clutch supporter of Keisha Lance Bottoms in her successful runoff against Trump-leaning independent Mary Norwood to become the 60th mayor of Atlanta. Now, he’s lending an assist to Abrams.

READ MORE: Pregnant woman arrested for a traffic violation says she was beaten while shackled by Jacksonville sheriff

Here are four key points that indicate T.I. could possibly be a secret weapon in Abrams’ arsenal to swing Georgia voters her way.

Gentrification is a hot topic all over the country as many traditionally Black communities grapple with richer white people moving in, setting up profitable, non-traditional businesses while also objecting to the presence of Black people in these communities.

READ MORE: 5 Things you need to know about Stacey Abrams and her historic run for the Georgia governor’s office

“If there is anything to gain from these communities that we have sustained throughout all the negativity over all of these years; if there’s anything positive to come from that, I think we should be the first ones to reap the benefits,” T.I. said.

Abrams shared that there are ways to achieve this.

“We can take steps to make certain that people who haven’t achieved that wealth don’t have to move out and one of the ways to do that is called a circuit breaker where you actually make certain that until your income rises to meet your property tax increase you don’t have to pay the difference,” Abrams said. “That’s a small thing that can not only allow people to not only stay in place, but it also allows them to free up capital to start the businesses that they’ve been waiting to start.”

Early in the conversation, T.I. spoke about the importance of small businesses, including “the candy lady,” in the community, and the difference between then and now in the age of gentrification.

“Right now, most people are there as renters and not owners . . . so they don’t really care about sustaining a certain level of success, not just for the business but for the community,” he explained.

T.I., himself, invested in his community early on. With his first check from the music industry, he gave his uncle, who builds houses from the ground up, the $25,000 he needed to grow his company. Prior to the 2008 housing bubble, his uncle began buying houses, some of which were the abandoned trap houses T.I. once sold crack out of as a youth.  Together uncle and nephew rebuilt nearly 62 of these homes selling to families in order to reinvigorate the Bankhead community. Next week, T.I.’s latest reality show, BET’s The Grand Hustle will show off his financial interests as the cameras document his search for new talent to expand his entertainment empire.

As a one-time small business owner herself, Abrams is as committed to supporting entrepreneurship as she is to bringing in big fish like Amazon who has publicly considered Georgia in its expansion. 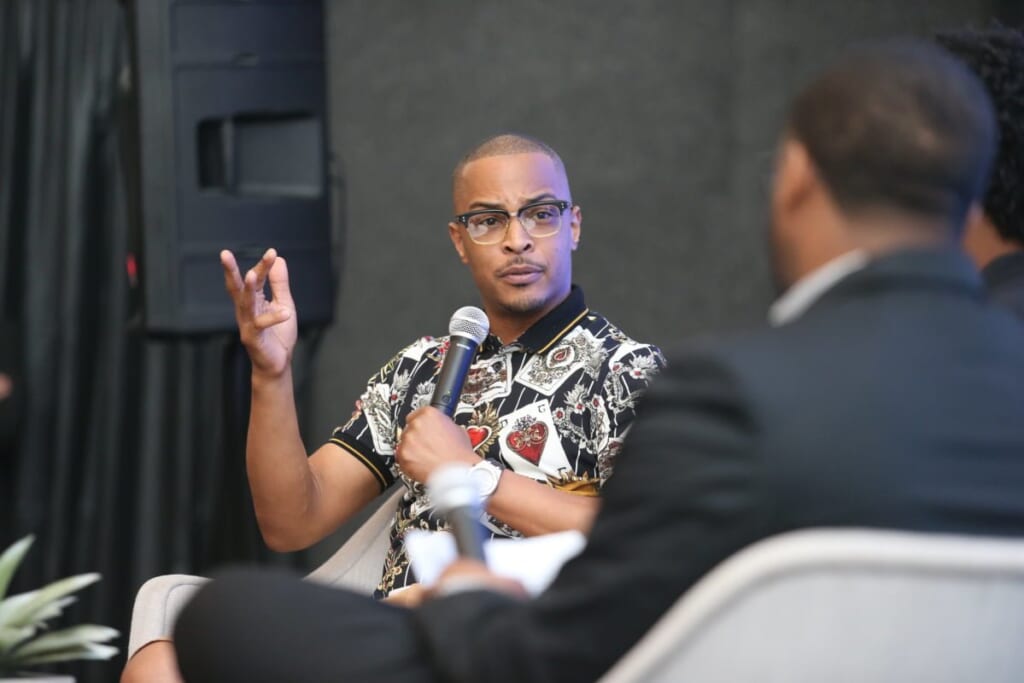 For Abrams, public education is one of the key factors to address both gentrification and the creation of small businesses. In her Democratic primary race, Georgia’s Hope Scholarship was a great point of contention. Abrams’s opponent Stacey Evans accused the now Democratic nominee for governor for turning her back on the program that ensures that many talented, underserved high school students attend college. Abrams shared that she not only saved the program, but also publicized her opposition to standardized tests as a main factor in awarding those scholarships.

That message resonated with T.I. who greatly objects to hinging “the eligibility of this scholarship on a standardized test.”

READ MORE: T.I. on what fuels his activism and why we should boycott bad businesses

“We just simply do not have the same bare life necessities as others which has our minds to trail into other [concerns] than just the test,” said T.I. referencing why poor Black students don’t traditionally perform well on these tests.

“It’s not because we’re less smart,” he continued. “Our minds are some of the most brilliant but our conditions sometimes just don’t match our potential and that is why [the elimination of standardized tests as one of the main factors in awarding scholarships] is extremely important.”

In order for Black Georgians to elect Abrams as their next governor, “we need to register at least a quarter million more people to vote,” T.I. said. “As it stands, you know Georgia is a red state, but that’s because of the droves of people who stay home when it’s time to get out there to become a part of the political process. If we can fill up the voter booths as much as we fill up the clubs, we’ll be okay.”

T.I reminded the audience that it starts with each of them who must make a commitment from today until November to vote.

“There is no other choice. This is who we’re voting for and this is who we support [referring to Abrams]. It may seem impossible because it’s never been done before as most things of greatness that are achieved are, but the way that it will happen is for the people who they counted out to show and prove that we can be counted on. That is the only way that it can happen.”