‘God is Trans’: A review of a bold new exhibit in Brooklyn shaking up the art world

What does it mean to have a limitless God?

When I first got this assignment, there was no question that I needed to see what this exhibit was about. The title alone “God is Trans” is enough to bring white evangelicals and Black Baptists to protest of such a “blasphemous” notion. A bold statement of religious freedom in a country currently battling issues with the intersection of gender, sexuality, race, and religion.

Upon entering the Richard Beavers Gallery in Brooklyn, there are about 20 paintings around the rectangular room, all envisioning images of Jesus, Mary, and other principle reference points of Jesus in the Bible— depicting Jesus at various stages of his life from a young child at the age of 8 well into his adulthood.

To the left, there is a sign with large Black print on a white board that states “GOD IS TRANS” with the additional message:

GOD IS TRANS interrupts the notion that God is male and ask the viewer to see God outside of traditional gender binaries but as trans; a spirit that occupies both genders and everything in between.

Most importantly in the additional messaging is that this exhibit is a SAFE SPACE, not just for Queer folks but for “God lovers” as the artist states. The artist, Genesis Tramaine, talked about her inspiration for the bringing this art to life. “God is trans is aimed to disrupt the notion that God is male or female. God is not either, God is constant, in-between, the first and the last and we have to give a presence to that. And I wanted to give evidence of that,” said Tramaine in an interview with theGrio.

A Seat in the Pew

To the right of the room when you first enter there is also a church pew—empty with several seats for anyone who has never felt welcome in a place of church or spirit. Those who have been traditionally denied based on their gender and sexuality now have a reserved seat for them in this room. 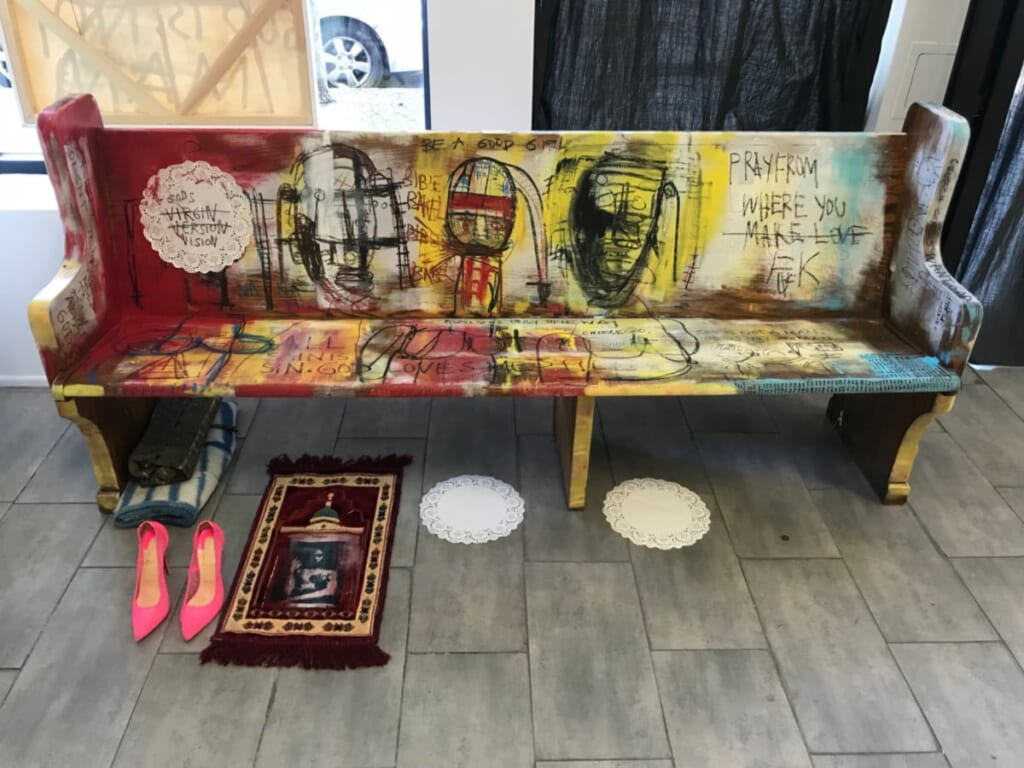 Genesis joined Unity Baptist church in 2017, a moment that not only changed her life but inspired her to begin sketching in the back of the church. Although saved and keeping God in her life, she missed her community and what church meant for her community. From sketching in a back pew, she began doing live painting in the church as a form of ministry, birthing this project.  “God is Trans” connects the dots for a community often left out the margins of religious doctrine.

The artwork is bold and large, with vibrant colors and verbiage explicitly telling the story of Jesus, and God, and Mary in various forms. One painting in particular depicts God with dreds, a reflection of how many have viewed him through our own Black church upbringings. In the upper right corner is the word “Jew”, an intersection rarely talked about with Blackness and origins of Christianity—which is most often seen with the deity in white skin.

In another painting that sits directly to the back of the room, Jesus is depicted in the wilderness, unclothed with a woman. Genesis “doused” this painting with a lot of crosses and eyes. She described the piece stating “When a black person is in trouble, there are a lot of eyes on you. You feel it, there is a heat. A lot of times they are not for you as it is not always a safe space. But if you can learn to use uncomfortable spaces to your advantage, you help the people around you. I’m not saying this walk with Jesus is not easy, the walk that I bear, the walk that we bear but it’s necessary.”

The beautiful thing about this exhibit is that the belief of the artist is not being forced upon you as law or even as religion. Genesis reiterates that her “Jesus is free.” She doesn’t know how Jesus appears to others, but her concern isn’t the appearance as much as the evidence that Jesus and God are present in life.

In this exhibit, the artist is genuinely opening up our minds and even better, creating a necessary dialogue around sexuality and gender in relation to religion—better yet, the denial of religion for so many from marginalized and oppressed communities.

It has always been stated that God is Love and the reflection of self, juxtaposed with the imagery that has become the acceptable standard for worship—male, cis, and primarily white, but at times Black. Through these visuals, various people from all walks of life are able to see themselves, and even more challenge the constructs of how religion has conditioned them into a binary way of thinking for subjects and topics that exist outside of it.

The exhibit is on display at the Richard Beavers Gallery in Brooklyn through August 11.