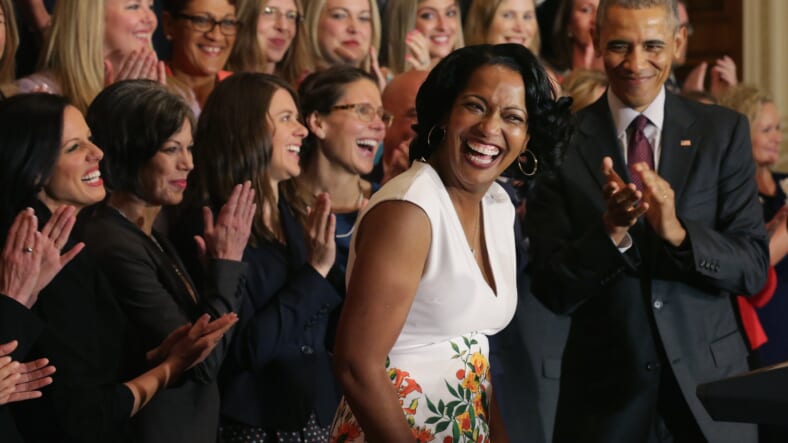 WASHINGTON, DC – MAY 03: 2016 National Teacher of the Year Jahana Hayes (2nd R) of John F. Kennedy High School in Waterbury, CT, has a hard time controlling her excitement after taking the stage with U.S. President Barack Obama (R) and her fellow state teachers of the year during a ceremony in the East Room of the White House May 3, 2016 in Washington, DC. Obama talked about the influence and importance that each classroom instructor has on the lives of their students while honoring the teachers from all 50 states and U.S. territories. (Photo by Chip Somodevilla/Getty Images)

The 2016 National Teacher of the Year could become the first Black woman to represent Connecticut in the U.S. Congress.

Jahana Hayes, a high school teacher from Waterbury and a Democrat, is vying for the U.S. House seat representing Connecticut’s 5th District. She will be part of the tense midterm Congressional elections in which Democrats are hoping to gain more traction politically. U.S. Rep. Elizabeth Esty, D-Conn., now represents that district but she will not seek reelection.

Hayes’ campaign video details a life in which she overcame hurdles and a classic American success story.

Teachers are nation-builders. That’s our job — to affect change, and to improve outcomes. But that’s the job of Congress, too. So I’m running for Congress.

Hayes who grew up in Connecticut’s Berkeley Heights public housing project in Waterbury was raised by her grandmother while her own mother struggled with drug addiction.

Hayes who became pregnant at 17, went on to raise her daughter, earn a master’s degree and teach at John F. Kennedy High School in Waterbury, according to CNN.

“This is my home, where people are strong, but they aren’t supposed to run for Congress,” Hayes says in the video over images of public housing.

READ MORE: Barack Obama on empowering women in politics: ‘Men have been getting on my nerves lately’

Hayes will face off with Mary Glassman in the Aug. 14 Democratic primary before the general election in November.

In her video, Hayes says, “If Congress starts to look like us, no one can stop us.”

She adds, “This is our moment to act, to organize and bring our truth to power.”

Hayes told Education Week that thoughts of her students motivated her to run for office.

“Teachers are nation builders,” she said. “That’s our job: To effect change, to improve outcomes. Isn’t that the same job of Congress?”

According to Education Week, Hayes is one of the dozens of teachers across the country who have launched bids to run for office as teacher strikes and protests take hold across the country.  Hayes also is part of a record 309 women running for House seats this year – and most of those bids are from Democratic women, according to the news organization.