Georgia lawmaker Jason Spencer apologizes for spewing n-word multiple times on camera, but will not resign 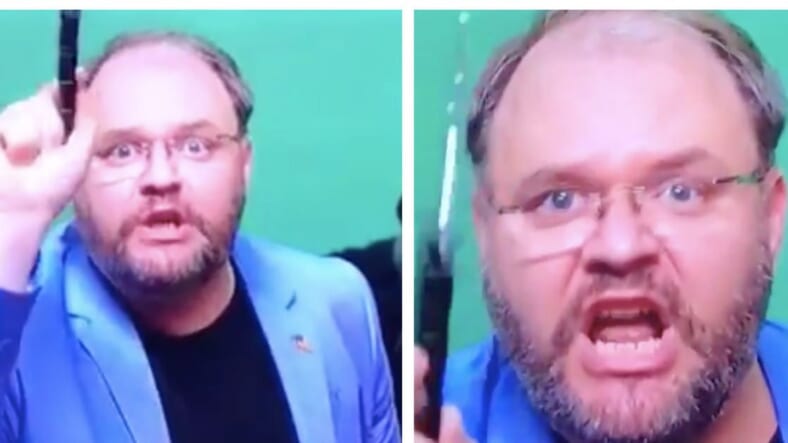 Georgia state representative Jason Spencer is the latest politician to literally and figuratively be caught showing his behind on Sacha Baron Cohen‘s new series Who is America?

The premise of the show is that Cohen disguises himself to cajole elected officials into saying and doing absurd things on camera. Last week, Cohen managed to get several well-known right-wingers to endorse arming kindergarteners with guns. This past weekend, Cohen captured Georgia state representative Jason Spencer spewing the n-word multiple times, pulling his pants down to show his bare behind and even “eating” a the faux penis of an imagined Middle Eastern terrorist.

This was all done under the guise of Cohen pretending to be an Israeli anti-terrorism expert who was conducting training exercises.

In the clips below, you can see Spencer referring to  Muslim terrorists as “sand n-words” and then he repeatedly shouted the n-word while being “trained” to get away from terrorists. He also pulled his pants down after Cohen told him this would scare away said terrorists during a kidnapping attempt.

Here is he screaming “nigger” to get attention during practice for a terrorist kidnappping. pic.twitter.com/6WZp0DydZz

Also, he pulled his pants down to practice showing touching his butt to a hypothetical terrorist, which would scare the terrorist because he would then become gay (as Cohen convinced him). pic.twitter.com/4fPbn9ho8q

Jason Spencer, who lost the Republican primary election earlier this year, has apologized for the on-air behavior and comments, but refuses to resign.

“I apologize to my family, friends, and the people of my district for this ridiculously ugly episode. Finally, there are calls for me to resign. I recently lost my primary election, so I will not eligible to hold office next term. Therefore, I will finish the remaining five months at my post and vacate my seat,” reads his statement in part.

“Sacha Baron Cohen and his associates took advantage of my paralyzing fear that my family would be attacked. In posing as an Israeli Agent, he pretended to offer self-defense exercises. As uncomfortable as I was to participate, I agreed to, understanding that these ‘techniques’ were meant to help me and others fend off what I believed was an inevitable attack,” he wrote.

Spencer also says he was so distracted by his fears that racist slurs spilled from his mouth at Cohen’s behest. “I deeply regret the language I used at his request as well as my participation in the “class’ in general. If I had not been so distracted by my fears, I never would have agreed to participate in the first place,” Spencer proclaims in his statement.