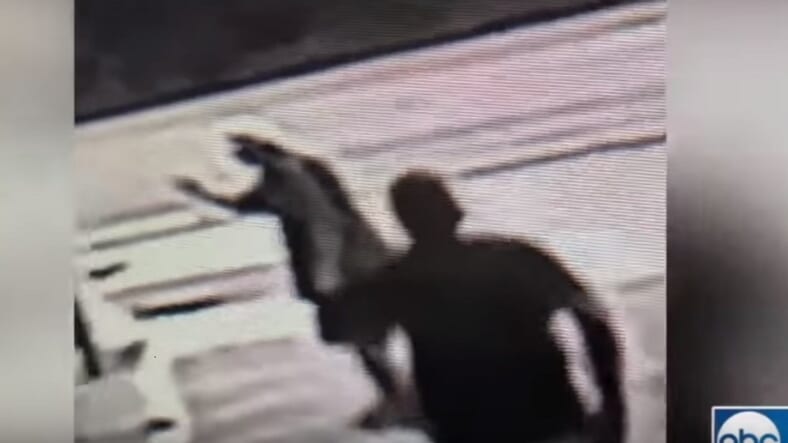 Stand Your Ground, the notorious Florida law that has allowed the likes of George Zimmerman to get away with murder, has struck again.

This time in Clearwater, Fla. as an argument over a handicapped parking spot ended in a 28-year-old black man being gunned down. Markeis McGlockton was shot and killed – collapsing and dying in front of his 5-year-old son – after he was shot by 47-year-old Michael Drejka last Thursday afternoon. The ABC Action News video below shows the encounter.

Pinellas County Sheriff Bob Gualtieri announced on Friday that they will not arrest Drejka despite video showing him killing McGlockton over a handicap parking space at a convenience store.

Gualteri said that the senseless killing falls under Florida’s “stand your ground” law which gives immunity to those who claim to be in fear of their lives and use force to defend themselves. The law has led to a number of instances in which people have been gunned down under dubious circumstances, including those when the shooters instigated the confrontations.

The department will forward the case to the State Attorney’s Office for a final decision, Gualtieri said. The began when Drejka, who according to store regulars had a history of antagonizing and threatening patrons over handicapped spaces, confronted McGlockton’s girlfriend, Britany Jacobs, about parking in a handicap space without a permit.

Surveillance video shows McGlockton, who was in the store at the time, coming up to Drejka and shoving him to the ground. Seconds later, Drejka pulls out a gun and shoots McGlockton in the chest.

McGlockton runs back into the store, before collapsing in front of his son. He was pronounced dead on the scene. Gualtieri said Drejka told deputies that he was he was in fear of being attacked again.

Jacobs, who had been with McGlockton since they were in high school and is the mother of his three children, fought back tears talking about the killing and says that the shooter instigated the incident by coming up to her car.

She says McGlockton was the one defending her.

“He’s getting out like he’s a police officer or something, and he’s approaching me,” she said to the Tampa Bay Times. “I minded my own business. I didn’t do anything wrong.”

When asked about her 5-year-old son, Markeis Jr.: “He’s not too good,” Jacobs said. “It comes and goes, but he knows he (his father) is dead.”

Gualtieri, who is also a lawyer, said the outcome may have been different before the “stand your ground” law, which has since put the burden of proof on prosecutors and not defense attorneys. He noted that there’s a pause of a few seconds before shoots McGlockton. “That pause gives me pause,” the sheriff said, invoking an adage: “Just because you can doesn’t mean you should.”

Drejka does not have a criminal history in Florida, but in 2012 a driver accused him of pulling a gun during a road rage incident. Drejka denied he showed the gun, and the accuser declined to press charges.

A couple of months ago, Rick Kelly says he stopped by the store, parking his tanker truck in the same handicap spot. Much like what happened on Thursday, Drejka walks around the truck checking for decals, then confronts Kelly about why he parked there.

Kelly says a fight escalated and Drejka threatened to shoot him.

“It’s a repeat,” Kelly told the Tampa Bay Times. “It happened to me the first time. The second time it’s happening, someone’s life got taken. He provoked that.”