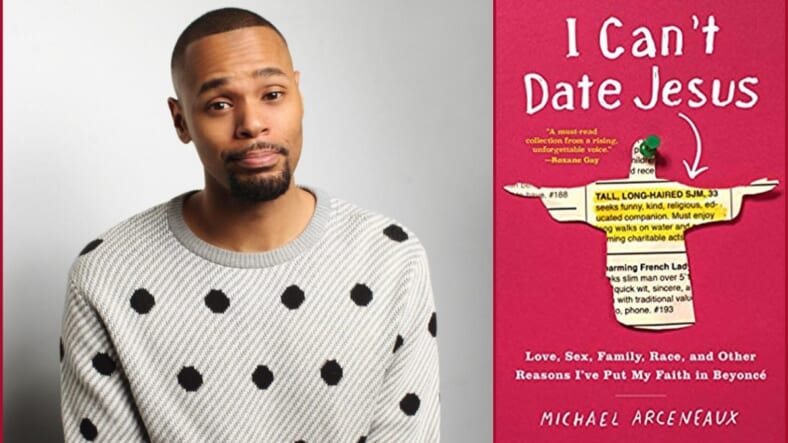 Michael Arceneaux is the author of the new book, “I Can’t Date Jesus.” (Photo by @stevenduarte)

For nearly a decade, media personality and author, Michael Arceneaux has been one of the leading Black Queer voices in media and journalism. His work has been featured in more than 30 national publications including Rolling Stone, Complex, The Root, and The New York Times, with a growing list of outlets seeking his unique voice and perspective. His style brings wit and humor to some of the hardest hitting topics and it has made him a stand out among his peers, while helping to usher in a new generation of Black Queer writers.

Arceneaux is now taking on his greatest challenge in publishing his debut memoir, “I Can’t Date Jesus: Love, Sex, Family, Race, and Other Reasons I’ve Put My Faith in Beyoncé,” (available July 24 on Atria), where he talks about everything from religion to sex all within the bubble of his undying love for his “lord and gyrator” Beyoncé.

TheGrio.com sat down with the first time author to chat about his writing process, his clear and present obsession with Houston’s greatest export, and the ongoing battle with his mother when it comes to telling his business.

TheGrio.com: You stated that you were glad you wrote the book you wanted to write, and not the book they wanted you to write. What was your process?

Michael Arceneaux: I realized in writing a book I had a much darker life than I wanted to admit, but I didn’t want to write about my life in that way. I didn’t want to lean into what’s expected of me. I didn’t want to talk about ‘oh it’s so awful to be me’ because I don’t think that. Having awful experiences doesn’t mean it’s awful to be me, but that is exactly what people wanted. Some people were like, we know your writing, we know who you are, and we’d love to work with you, but we don’t want this.

TheGrio.com: How did you get past all of that?

Michael Arceneaux: People wanted me to be more political, but the book in itself is a political statement. Most people wanted me to be the sad, Black gay, but that’s not who I am. They wanted, ‘oh you’re Black, and gay, so it must be so hard for you’ and yes, but like many people, at least from my experiences, I wanted to have fun with it. There are white gay authors who have been able to do that, but you don’t have that from Black queer people. It was a challenge trying to convince them that we can do that too.

TheGrio.com: How did you come with the title and did have you heard from Queen B about it yet?

Michael Arceneaux: I have not heard from Beyoncé, but I’m an OG stan, so I’m hoping she doesn’t sue me.The publisher wanted a subtitle that could better explain the book to people who might be thrown off by the main title. The title is also a chapter in the book and it explores the relationship I have with my mom. It explains why “I can’t date Jesus” and delves into heavy subjects with the use of wit, humor, and pop culture references.

TheGrio.com: Is the laughter a way to help process the heavy?

Michael Arceneaux: Some people feel like I leaned into the humor too much, but if you know me then you know that I often joke about how I’m dead inside, so it takes a lot for me to cry. Even when I cry, it kind of turns into rage, which I need to work out with a therapist and then I tend to make a joke about that. Everyone in my family is really funny and we try to look at life that way because things can be so hard. If you can’t laugh at life, then I don’t know what other alternative there is other than weed, but even weed makes you goofy, so I think laughter helps.

TheGrio.com: What do you want readers to take away from the book?

Michael Arceneaux: I grew up Southern Black and Catholic, so there are a lot of repressive attitudes there. Many of us come into the world with certain expectations of what identity might mean. Like Black, queer or any type of different, but specifically those two, people will have certain expectations about what your life will mean. I struggled with that much longer than I would care to admit.

I just want people to know that what you are told early in your life does not have to define your life.

READ MORE: ‘God is Trans’: A review of a bold new exhibit in Brooklyn shaking up the art world

TheGrio.com: Has there been any family backlash?

Michael Arceneaux: This is still one of the things my mother and I disagree on. I love my mother to death and this wouldn’t have happened without her, but she takes issue with the fact that I’m telling my story. She tends to look at information as a weapon. While I understand why she thinks that way, particularly as someone who is in her 60’s and helped desegregate her high school, she doesn’t see the beauty in telling your story exactly how you want it to be told. Now, more than ever, we need to be open about who we are and not be so worried about what other people will do with that information. It’s still a somewhat terrifying feeling, but it’s also a freeing feeling.

TheGrio.com: Do you think your story will have a different type of impact?

Michael Arceneaux: This is a very personal story told in a specific way and I wish I had that when I was trying to figure myself out. I never had a book like this growing up. I don’t want to denigrate anyone that came before me because I’m grateful to every Black, queer person who  has contributed in some way, but everything else around me when I was younger was telling me that what I wanted to be was wrong. I hope someone can pick up my book and be like ‘no I’m fine and I can be myself.’

TheGrio.com: Was it hard to talk about topics like sexual assault and reveal names?

Michael Arceneaux: No, there are real names and then there are fake names because we are not catching those cases. You ain’t catching nothing from me, but the student loan debt I’m still trying to pay off.

Also, out of respect for certain people, you don’t’ want to tell everyone’s name. I’ve struggled with in telling my story, I’m in part telling other people’s stories, but from my lens. There are certain things in the book that I left out because it wasn’t my place to say. I wanted to be sensitive, but also be truthful about my life’s story. Shout out to the legal department at Simon and Schuster, but certain names were in fact changed.

READ MORE: Welcome to the ballroom: ‘POSE’ pushes new boundaries and adds an authenticity to the trans world like you’ve never seen before

TheGrio.com:  What happens if you’re on your media tour for the book, walk into an elevator and Beyoncé is there on her way to the lobby. You have 30 seconds to tell her about your book. What do you say?

Michael Arceneaux: OOOOHHH. That’s a good ass question. I would say to my Lord and gyrator that my book is about learning how to be a hoe without fearing God and all that Southern religious oppression. I think she would get it. Then I would lean in and tell her ‘girl, you know I have a chapter dedicated to you because you are my everything.’ Then I would remind her that we went to the same middle school and that my brother actually went to school with her sister.

I hope she does read it. I would love to say I received some flowers from Beyoncé

I Can’t Date Jesus is in stores everywhere July 24th.