Trevor Noah is learning the hard way that in this age of social media “receipts,”  bad jokes have a way of haunting you years after the fact.

The South African comic and “The Daily Show” host has come under fire after a 2013 clip of him insulting aboriginal women suddenly resurfaced. What makes this even worse is it is happening right before his Australian tour, which starts in Melbourne next month.

“All women of every race can be beautiful,” Noah says to an audience in the footage. “And I know some of you are sitting there now going, ‘Oh Trevor, yeah, but I’ve never seen a beautiful Aborigine'” he jokes.

”Plus it’s not always about looks, maybe Aborigine women do special things, maybe they’ll just like, jump on top of you,” Noah, 34, concludes, before imitating the sound of a didgeridoo while inferring oral sex.

Since the video went viral social media has erupted with people calling for the comedian’s upcoming Australian tour to be boycotted. The clip, which was uploaded to YouTube under the title of “Women of all Races are Beautiful,” has been removed after “The Daily Show‘s” segment director and director of Trevor Noah films, David Meyer, filed a copyright complaint with the site.

CW: Racism, sexism, objectifying and degrading Indigenous womenTrevor Noah's team are working extremely hard to have this racist and sexist 'joke' erased from existence. I recorded this yesterday before the original clip was removed. I said I was done with this but I believe this clip should be out there so that they cannot just sweep it under the rug. So many poeple ask for proof or 'don't believe it' so here it is. Trevor Noah calling Aboriginal women ugly. Then saying that it's not all about looks and that maybe we are good for sex. Then simulating Aboriginal women performing sex acts with an instrument held sacred by many Indigenous people. These comments are not only hurtful, but contribute to harmful stereotypes perpetuated to justify our abuse throughout history: That we are good for nothing but our bodies and our sex.If men want to make money off of being hailed as 'feminist heroes' then they better be ready to be called out. He has not apologised and is actively attempting to hide what happened. I won't hold my breath for a proper apology.#TrevorNoah

This isn’t the first time the comedian has caused controversy with his tweets. He’s also gotten in trouble for tasteless jokes in relation to women, Jewish people and rapper Chris Brown‘s abusive behavior. 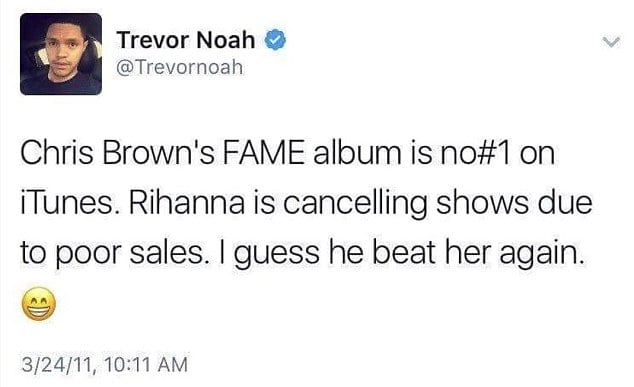 Monday, Noah, who took on the role as host of “The Daily Show” host three years ago from Jon Stewart, issued an apology for his comments on Twitter.

“After visiting Australia’s Bunjilaka museum and learning about aboriginal history first hand I vowed never to make a joke like that again. And I haven’t. I’ll make sure the clip from 2013 is not promoted in any way,” he tweeted to his followers.

@joewilliams_tew you're right. After visiting Australia's Bunjilaka museum and learning about aboriginal history first hand I vowed never to make a joke like that again. And I haven't. I'll make sure the clip from 2013 is not promoted in any way.