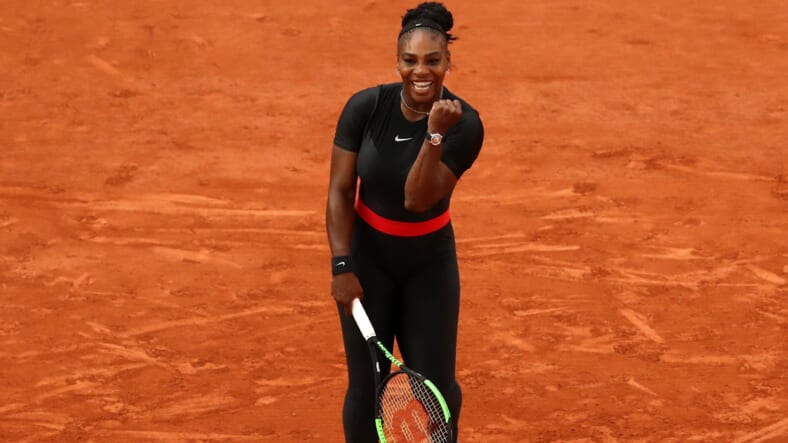 Serena Williams celebrates victory during the ladies singles third round match at the 2018 French Open on June 2, 2018. (Photo by Cameron Spencer/Getty Images)

Serena Williams is fed up and has accused tennis authorities of blatant discrimination.

Tuesday, the star athlete vented on social media about how she has been tested more than other players by the U.S. Anti Doping Agency.

The 36-year-old, who has staged an impressive tennis comeback since the birth of her daughter Alexis Olympia, and reached the final of Wimbledon two weeks ago, said she appreciates how regular testing was “helping to keep the sport clean,” but that in her case it had become excessive and unfairly targeted.

‘…and it’s that time of the day to get “randomly” drug tested and only test Serena,” she posted sarcastically. “Out of all the players it’s been proven I’m the one getting tested the most. Discrimination? I think so. At least I’ll be keeping the sport clean #StayPositive”

Earlier this month, Williams told press at Wimbledon that she didn’t care how often she got drug tested as long as the other players were treated the same way.

“How is it I’m getting tested five times in June?” the seven-time champion inquired. “It’s only June, I’ve been tested five times. I’m OK with that, as long as everyone is being treated equally. That’s all I care about. I despise having people in our sport that aren’t being honest.”

…and it’s that time of the day to get “randomly” drug tested and only test Serena. Out of all the players it’s been proven I’m the one getting tested the most. Discrimination? I think so. At least I’ll be keeping the sport clean #StayPositive

“I feel like it’s equality, that’s all I’ve been preaching, it’s all about equality. If that’s testing everyone five times, let’s do it. Let’s be a part of it. I never knew that I was tested so much more than everyone else. I didn’t realize it was such a discrepancy, at least with the American players, both male and female.”

On one occasion, an anti-doping agent actually showed up to her house at an unreasonable time. Reports circulated that he left empty ended. Williams addressed the incident as well.

“For me it’s a little frustrating. How can I have a missed test when it’s nowhere near the time I should be there? It’s really disappointing, shocking.”

She wanted Italian for dinner, so…

Loving family time in beautiful Italy. What an insane room I stayed in. I got to look at stars from my bed at night!! This week has been a dream! ?? ☁️ @ChenotGroup @albereta @espacechenot_albereta