This woman won't be stopped. 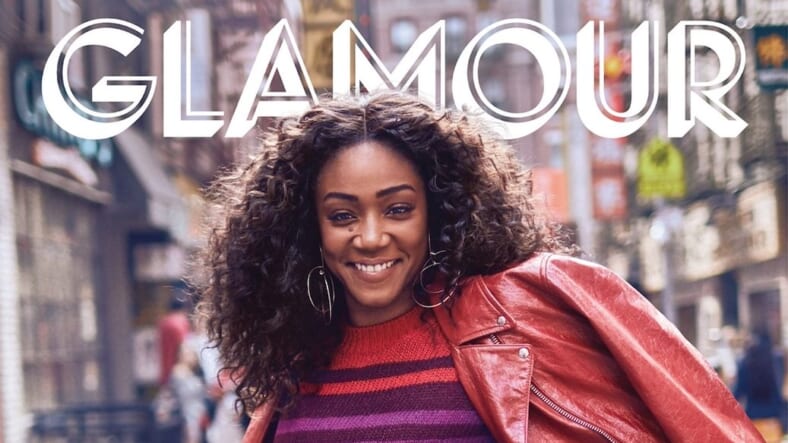 Tiffany Haddish is ready for her close up on the cover of the latest issue of Glamour and the comedienne nailed every shot.

Inside, she opened up about ho her life has changed since her epic rise to fame and served up some little-known facts.

Here are 7 things we learned from the candid interview:

She has a back-up plan. If her Hollywood career doesn’t pan out, Haddish has her sights set on being a particular type of educator. “I don’t mind being a teacher. I always say, ‘If this comedy thing doesn’t work out, I would probably be a sex education teacher,’” she says. “I would be the best sex education teacher. I guarantee none of my kids would have STDs after I finish teaching them.”

She knew her time was coming. “My opportunities are whatever I create,” she explains. “My thoughts from two years ago is what’s happening right now. I really think my thoughts are my magic wand.”

She didn’t snitch on Sanaa Lathan. Even though everyone believed Tiffany Haddish confirmed that the Love & Basketball star was the woman who bit Beyonce, that’s not what went down. “I didn’t confirm shit. The reporter was like, ‘Sanaa Lathan?’ I’m, like, three drinks in, so of course I was about to laugh,” she says. “They thought I put her name out there, but I didn’t. I never said nothing. And Beyoncé didn’t say nothing. Let the person who [bit Beyoncé] bury themselves…. I ain’t trying to destroy this girl. I didn’t say shit about the girl.”

She knows how to deal with predatory Hollywood men. “I’ve had experiences where directors or producers are like, ‘You want this job?’ ” she says. “I might get real bossy and say, ‘First off, don’t nobody want to see your little dick!’ I get loud, all that.”

She’s hell bent on supporting her family. “I’m just glad I got some money now, because now I can do a better job at taking care of them… I got my mom out of the mental institution, like I said I would, in December, and I got her an apartment with my sister and a nurse that comes to her,” she says. “I ain’t never said this out loud, but I want to be able to give every one of my siblings a million dollars to create whatever they want to do. That’s four million dollars that I don’t need.”

Tiffany Haddish has more than one talent and she proved it by flaunting her dance moves for Ciara’s #LevelUpChallenge. She and Bresha Webb shared their epic moves in a video on social media and caught the attention of CiCi herself.

Love this post by @TiffanyHaddish and @BreshaWebb! Ways they plan to #LevelUp! Get it ladies! MotivationalMonday! pic.twitter.com/BVoZMCl1ug