It's been nearly a decade since Disney last featured a Black heroine. 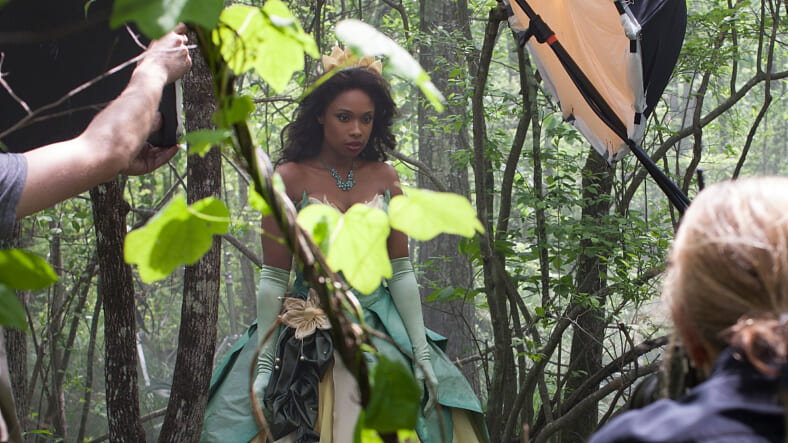 In this handout photo provided by Disney Parks, taken May 29, 2013 Jennifer Hudson poses for acclaimed photographer Annie Leibovitz as Tiana from ‘The Princess and the Frog’ Tiana was the last Black princess animated character to be featured in a Disney film. (Photo by Scott Brinegar/Disney Parks via Getty Images)

It’s official! For the first time ever, Disney’s next project will feature an African princess.

According to Deadline, Dope director Rick Famuyiwa will produce the film titled, Sadé.  The live-action fairtytale will follow the young heroine as she attempts to save her kingdom’s people using her newly discovered magical powers. Ola Shokunbi and Lindsey Reed Palmer, the writing duo who originally pitched the idea, will be working on the screenplay.

“Disney as a corporate entity has been at the forefront in recent years of the effort to center diversity and inclusion in their business operations,” said Darnell Hunt, Director of UCLA’s Ralph J. Bunche Center for African American Studies. “They understand where the market is and where the market is going, and they’re trying to

There is no doubt that the studio’s mega international success with releasing Black Panther in February probably made the idea a lot more enticing.

The film has dominated the box office this year, pulling in over $1.3 billion and finally proving that underrepresented minority narratives can actually be turned into blockbuster films. Black Panther now the third-highest grossing American film of all time and also Disney’s second highest-grossing film after Star Wars: The Force Awakens.

“It shatters all the myths about what’s marketable internationally,” Hunt tells NBC News. “The film did exceedingly well.”

It’s been nearly a decade since Disney last featured a Black heroine with The Princess and the Frog. The character of “Tiana,” who was voiced by Dreamgirls and Broadway star Anika Noni Rose, was the ninth Disney princess to join the ranks of Cinderella, Sleeping Beauty and Snow White.

Despite the initial enthusiasm about having a Black princess, the film received mixed reviews for relying heavily on “jazzy” New Orleans stereotypes and also for making the prince green (instead of Black) for the majority of the feature.

“It wasn’t a perfect film,” Hunt said. “On balance, I think it was good to see the image of a young African-American woman as truly having it be her story. And having that image available for young girls to see that something that young girls, particularly young black girls, wouldn’t have seen before.”

READ MORE: Lebron James takes on Trump’s NFL attacks ‘I believe our president is trying to divide us’

Although “Sadé” does not yet have a director, the studio is hoping to strike a better chord with this project than with its first attempt.

“The world is obviously multi-colored, multi-layered, multi-faceted,” Iger said during a business lecture series at Goldman Sachs. “The more we infuse that in our storytelling the better off we are.”