Vandals have once again scarred the marker where 14-year-old Emmett Till was killed by white supremacists in 1955 in the Mississippi Delta, the Clarion Ledger reports. 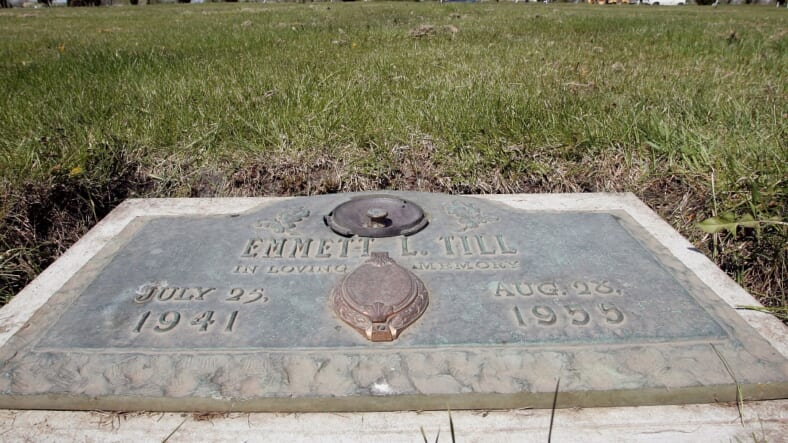 A plaque marks the gravesite of Emmett Till at Burr Oak Cemetery May 4, 2005 in Aslip, Illinois. The FBI is considering exhuming the body of Till, whose unsolved 1955 murder in Money, Mississippi, after whistling at a white woman helped spark the U.S. civil rights movement. (Photo by Scott Olson/Getty Images)

Vandals have once again scarred the marker where 14-year-old Emmett Till was killed by white supremacists in 1955 in the Mississippi Delta, the Clarion Ledger.

The memorial sign was found riddled with bullets this weekend –35 days after it was replaced due to previous vandalism. According to the publication, if the Emmett Till Memorial Commission were to replace the sign again, it would mark the fourth time it has been restored.

The state began to memorialize Till in 2005 with the naming of a highway after him. Since then, various signs and monuments to his death have been desecrated or stolen.

Dave Tell, author of the upcoming book, “Remembering Emmett Till,” explained to the Clarion Ledger why the sign should not be replaced again.

“The bullet holes bear eloquent witness to the fact that work remains to be done, that the memory of Till’s murder still cuts a rift through the heart of the modern day Delta” he said.

The historical marker at Graball Landing is where Till’s body was recovered from the Tallahatchie River. It is the final site on the Civil Rights Driving Tour in Tallahatchie County and many locals are committed to ensuring that Till’s memory is not disrespected.

“The Emmett Till Interpretive Center is committed to seeing the sign replaced,” said co-founder Patrick Weems. “We have already begun plans to replace the sign and have notified local law enforcement about the vandalism.

“Our mission is to continue to tell the truth as it concerns the Emmett Till story. We are saddened by these events but are unwavering in our commitment to truth and racial reconciliation.”

Alvin Sykes, president of the Emmett Till Justice Campaign, agreed with Tell that the sign should be left as is.

“The sign going back up is a sign of progress,” he said. “The bullets are showing how much further we need to go.”