Remembering Michael Brown on fourth anniversary of his death 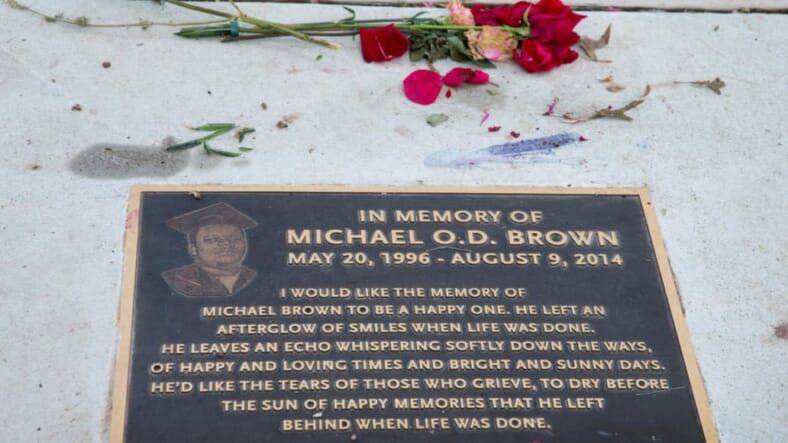 Roses lie next to a plaque in the sidewalk which honors Michael Brown marking the four year anniversary of Brown's death on August 9, 2015 in Ferguson, Missouri. (Photo by Scott Olson/Getty Images)

In the very place where unarmed teen Michael Brown’s body hit the ground, after being shot and killed by a Ferguson police officer, his father has laid mementos on the street in time for the four-year anniversary of his untimely death.

August 9,2014 is a day the Brown family will never forget and they want the rest of the world to remember it as well. In an effort to do so, they have rebuilt a makeshift memorial with flowers, balloons and a teddy bear to commemorate Brown’s death after being fatally shot by Officer Darren Wilson, the St. Louis Dispatch reports.

“This is where everyone came together, stood together and stayed together,” said Michael Brown Sr. “They hurt together, they persisted together, they loved together. They bonded as family. Hopefully, that love can spread out of here and bring love to all of St. Louis.”

The group responsible for the memorial gathered together as they have done for the past four years and lit candles while laying roses in the street where Brown was struck down by a hail of bullets. Those in attendance wiped away tears as they laughed, cried and hugged.

This year, the sadness was short-lived as the Ferguson community has a reason to celebrate with the recent political victory of City Councilman Wesley Bell unseating the longtime incumbent, Robert McCulloch in a contentious, high stakes race to become the next St. Louis County prosecutor.

After the Ferguson shooting erupted in 2014, protestors called for Wilson to be arrested and charged. D.A. McCulloch, who won his seventh term as prosecutor just days after Brown’s death, refused to indict Wilson.

“The fact that we have to come out here and do this is shameful, and it hasn’t stopped,” said activist Michael Hassell, referring to other fatal police shootings. “But now we’re putting the right people in office to make sure our efforts in the streets aren’t in vain.”

“He wants to see the same change that we’re fighting for,” said Meldon Moffit, a longtime Ferguson protester. “I support the man 100 percent.”