She quit her job as a social worker in Los Angeles in May, and is scheduled to move next month, the report says. 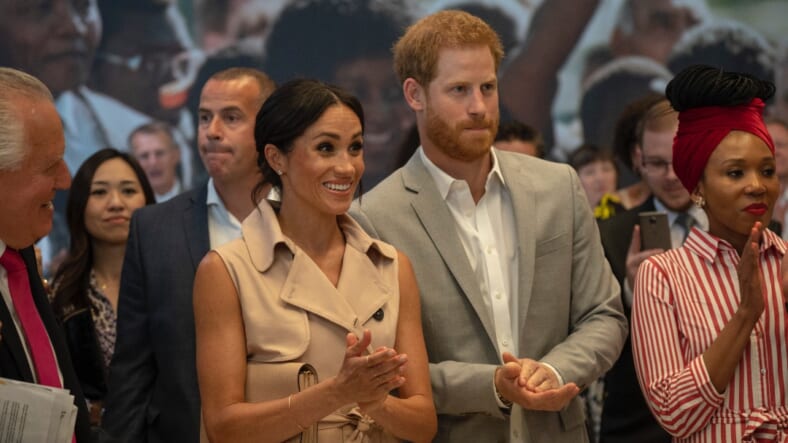 The Duke and Duchess of Sussex visited the Nelson Mandela Centenary Exhibition at Southbank Centre's Queen Elizabeth Hall. This exhibition explores the life and times of Nelson Rolihlahla Mandela (1918 – 2013) and marks the centenary of his birth. It provides insight into Mandela’s journey from young freedom fighter to becoming the inspiration for an international movement against South Africa’s violent and oppressive apartheid system. The exhibition is jointly curated by the Apartheid Museum in South Africa, the British Anti-Apartheid Movement Archives, and the Southbank Centre. Picture: Arthur Edwards

Doria Ragland, the mother of Meghan Markle, is getting ready to move to England to be closer to her royal daughter, according to the Daily Mail.

Ragland, the only member of the Markle’s family at the royal wedding, has kept largely quiet about her daughter’s marriage to Prince Harry. She quit her job as a social worker for the Didi Hirsch Mental Health Services clinic in Los Angeles in May, and is scheduled to move next month, the report says.

Meanwhile, Markle’s father, Thomas, has gotten himself in hot water for working with paparazzi and lying to Prince Harry

Markle confessed to lying when he told the prince that he did not cooperate with a paparazzi photographer to pose for shots – one of which showed him apparently being fitted for a wedding suit.

Markle famously pulled out of walking his daughter down the aisle days before the wedding, citing health reasons.

It was not the first time he has stirred up controversy since his daughter’s nuptials. Markle also previously caused a stir when he outed Prince Harry as an apparent Trump supporter, claiming that when he and Harry talked politics, the Prince urged him “to give Trump a chance.”

“Our conversation was I was complaining about not liking Donald Trump, he said ‘give Donald Trump a chance’. I sort of disagreed with that.”

After this, he claimed credit for his daughter’s success and her marriage in a Mail interview last month.

“I’ve just about reached my limit with Meghan and the Royal Family,” Markle said. “What riles me is Meghan’s sense of superiority. She’d be nothing without me.

“I made her the Duchess she is today,” he said adding that “it would be easier for Meghan if I died” because “everybody would be filled with sympathy with her.”