She appeared Sunday on NBC’s 'Meet The Press' to dish more about her brief, but tumultuous time at the White House. 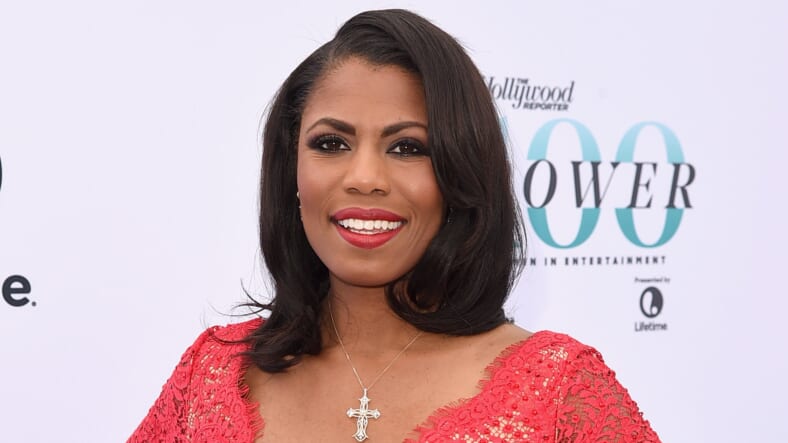 After declaring dubiously on Friday that she has tapes of Trump saying the “n-word,” Omarosa appeared Sunday on NBC’s Meet The Press to dish more about her brief, but tumultuous time at the White House. During the interview with Chuck Todd, she brought a recording of her firing by Chief of Staff John Kelly and claimed that it involved a veiled “threat.”

Finding out that Omarosa was not a particularly loyal employee is like learning that the guy calling himself a “wallet inspector” is not, in fact, licensed to take your wallet.

Kelly is heard in the recording telling Omarosa that she had serious “integrity issues” and compared her being let go to a military court martial. He then offers to make it a “friendly departure” and said that she violated some “very serious legal issues” without elaborating on what those were.

The Washington Post reported that that after being fired, Omarosa declined a $15,000-a-month job offer from Trump’s campaign, which included a nondisclosure agreement stating that she could not make disparaging comments about the campaign, Trump, Vice President Pence, their families, any Trump or Pence family company or asset.

The recording of Kelly in the situation room could prove problematic for Omarosa, as she may breached security protocol, the Post notes. The Situation Room is the inner sanctum of the White House.

Also, during the Meet the Press interview, Todd pressed her on her past defenses of Trump’s racism and misogyny, including when she said in 2016 that her hiring was proof that Trump isn’t racist.

Omarosa! I hear you mentioned me on Meet The Press. Don’t reference me or use my name. Keep my name out of your mouth. You have done enough. Your lies and crazy behavior are catching up to you. Can you say National Security breach? Lawyer up!

“Yes, I was complicit in deceiving this nation,” Omarosa said, noting that she had no idea that Trump could’ve been racist when she met him in 2003 – despite noting his obsession with the Central Park 5. “It’s clear in hindsight, because hindsight is 20/20.

Omarosa also said Trump, who referred to her as a “lowlife”in response to the accusations, is “mentally declined” and not engaged in important policy decisions.

April Ryan, the American Urban Radio Networks reporter who was routinely a target of Omarosa’s, said on CNN that the former staffer is a “monster” that Trump created.

“He created the monster in his own likeness and the monster has come back to bite him,” Ryan said. “She wanted to prove that she was in their camp because she used to be a Democrat. And she went so far as to try to go after me.

“She lied on me, telling people that I was taking money from Hillary Clinton to hurt my career,” she added. “The bottom line is that yes, she was complicit, but she was doing all this knowing that there was going to be a payoff in the end for her. She’s not a friend, she’s a liar, and I would say she’s evil.”