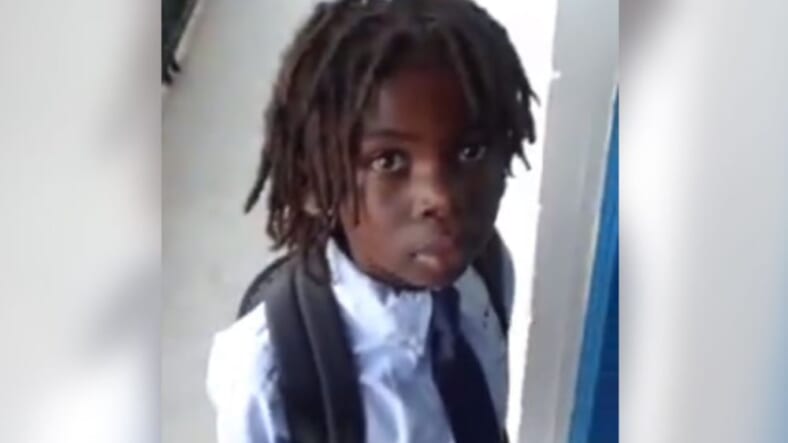 A six-year-old dressed impeccably in his uniform for his first day of school was turned away at the door of a Florida Christian School and told he couldn’t attend because his dreadlocks didn’t fit the dress code.

Um, does that sound like the “christian” thing to say to a child?

The child’s father, Clinton Stanley Sr was understandably upset that his son was banned from attending A Book’s Christian Academy in Apopka, Florida. On video, Stanley tried to reason with a staffer about his son’s hair, to no avail.

As little Clinton Jr looked on with sadness in his eyes and a backpack on his back, ready for his big first day, his father kept his cool and recorded the interaction in a Facebook Live video, the Daily Mail reports

“My son just got told that he cannot attend the school with his hair,” Stanley says in the video that has now gone viral.

This is absolutely infuriating.

This sharp young Black boy, clean as ever, gets kicked out of school because he has dreads.

His father rightfully struggles to maintain his emotions at the disappointment of it all. pic.twitter.com/WOpUGLqg8l

A staffer said the hairstyle violated the school’s policy.

“If that’s not biased then I don’t know what is,” he says. “Personal opinion.”

Stanley continued to try to reason with the woman in the video, asking if he could braid his son’s hair so he could go to school, but the staffer shot back that it wouldn’t be acceptable because the style “has to be above the ears.”

The staffer then told Stanley she would need to un-enroll his son from the school.

“I don’t want him here period. That’s his hair.”

Stanley then points out that a woman has should-length hair and then asks:

“What’s the difference? … That’s a rule, I respect that. It’s just not right. It’s not. That’s not very disrespectful and biased. I should have been told this months ago.”

Stanley ultimately enrolled little Clinton in another, more welcoming school on Tuesday and shared a picture of his son’s hair still in dreadlocks.

Here’s Day #2 of the first day of school for this young king.

Thankfully a new school welcomed him, his style, and all of his hair – with open arms. pic.twitter.com/ryOYnTlMYQ

While Stanley said he believes it was racial, the school has since denied that race was a factor and noted a school policy from 1971, which the school first opened that requires boys to have short hair, The Ledger reports.

“No dreads,” administrator Sue Book said. “All of our boys have short hair … It’s the style of hair. We don’t allow it. We never have.”

The school noted that 95 percent of its student population is Black.

“We are living in the real world. Everybody’s different, everybody looks different,” Stanley Sr. told WESH-TV. “We are all Christ like, so if you are telling me that if Jesus comes to your door…his hair is long.”

Book reportedly said little Clintron will be welcomed back if he cuts his hair, but the family declined that offer.