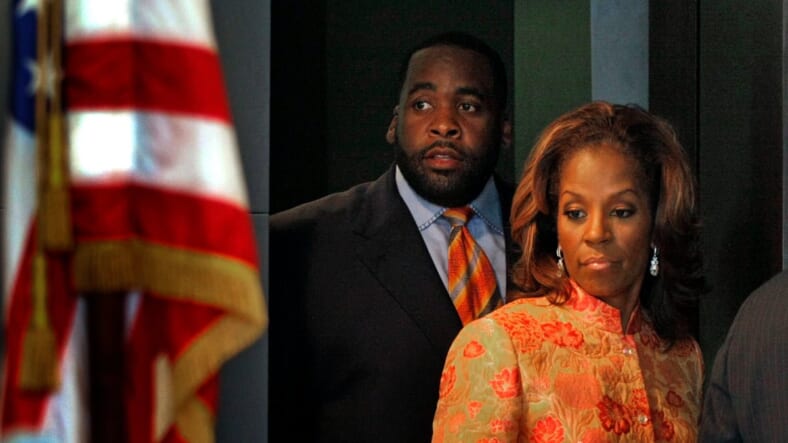 “The great fire started when I broke and forsook my marriage vows,” the Facebook post begins, as he confirmed he had an affair beginning in 2008.

“The sin in my life gave wide open spaces within my marriage, my friendships, and my most treasured relationships for evil to creep in. Satan sifted me, us, like wheat. Some of the damage and destruction that I ultimately caused could not be restored or repaired. Some of the things that were shaken…were irreparably destroyed. My marriage was one of them.”

READ MORE: EXCLUSIVE: Omarosa on her message to the Black community– “I Came Up Short” (Part 1)

The post covers 10 years of highs and lows in the relationship between Kilpatrick and Carlita, and states his marriage was over the day his personal text messages were made public. Those messages proved that he was having an affair with Christine Beatty, his ex-chief of staff.

Kilpatrick, who never refers to his ex-wife by name, goes on to write:

“On January 24, 2008, the revelation of an extra-marital affair, through public release of my personal text messages, was plastered across newspapers throughout the United States of America. The “secrets” about the relationship with my friend and Chief of Staff; Christine Beatty, was no longer hidden. The specific words describing the torrid, passionate, and intimate moments of that relationship was in the public sphere for all to see. This was the space that many hateful forces used to employ strategies of unprecedented government intrusions, selective and malicious prosecutions against me, that would last for the next 10-years. These targeted campaigns of evil would cause great brokenness and defeat, separation and distance, sadness and depression, anger and bitterness, even bondage and incarceration.”

The disgraced mayor resigned from office after pleading guilty to perjury in 2008. He was later found guilty on 24 of 30 counts, including racketeering.

In hindsight, while Kilpatrick now understands his “sins,” he now believes his children were “ultimately the greatest victims in this whole mess.” Yet, he does not apologize to either his children nor Clarita in the post.

Kilpatrick is scheduled to be released from jail on Aug. 1, 2037. He is also ordered to pay millions back to the city of Detroit in restitution.