He “passed away peacefully on Saturday after a short illness,” the Kofi Annan Foundation said in a statement. 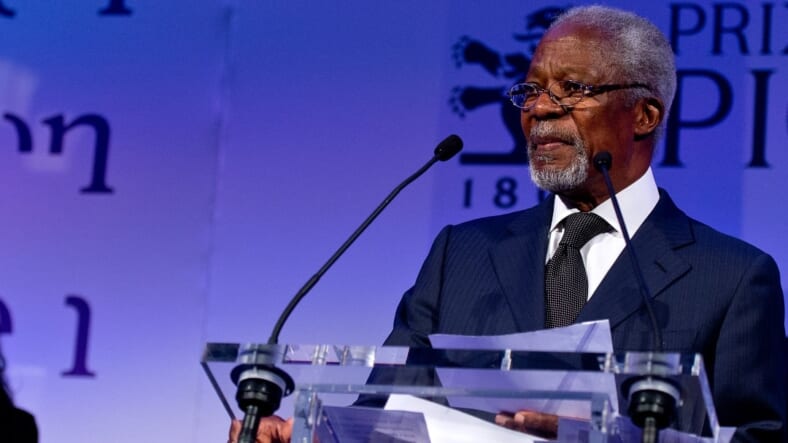 Kofi Annan attends the Prix Pictet award ceremony where Honorary President Kofi Annan presents CHF100,000 Prix Pictet ahead of the exhibition, opening to the public from 22 May at Victoria & Albert Museum on May 21, 2014 in London, England. (Photo by Ben A. Pruchnie/Getty Images for Prix Pictet)

Ghana has declared a week of national mourning after the death Saturday of its native countryman, Kofi Annan, the only Black African to become U.N. secretary-general, according to multiple news organizations.

Annan, 80, “passed away peacefully on Saturday after a short illness,” the Kofi Annan Foundation said in a statement, according to NBC News, hailing him as a “global statesman and deeply committed internationalist who fought throughout his life for a fairer and more peaceful world.”

READ MORE: Is she invited to the cookout yet? Omarosa threatens to spill more scalding hot tea

The foundation added, “Wherever there was suffering or need, he reached out and touched many people with his deep compassion and empathy.”

“Kofi Annan was a guiding force for good,” NBC News quoted current U.N. Secretary General Antonio Gutteres as saying about his predecessor. “In many ways, Kofi Annan was the United Nations,” Gutteres said.

Annan served two terms as secretary-general from 1997 to 2006. After his stint as U.N. chief, he served as U.N. special envoy to Syria and headed up efforts to end the conflict there.

For several years, Annan lived near Geneva, Switzerland. He died in a hospital in Bern. His wife, Nance, and their children, Ama, Kojo and Nina were with him in his final days, NBC reports.

In 2001, Annan received the Nobel Peace Prize for helping to revitalize the U.N., according to the BBC.

Diplomats mourned the loss of their friend and leader in the diplomatic world.

U.N. High Commissioner for Refugees Filippo Grandi tweeted that Annan was “a wise mentor and good friend.” Grandi added, “We at UNHCR – and millions of others around the world – will miss him very much.”

Learning with deep sadness of the passing of #KofiAnnan: international leader, wise mentor, valuable adviser, good friend, role model. We at UNHCR – and millions of others around the world – will miss him very much. pic.twitter.com/NUcpu6amOP

Moussa Faki Mahamat, chairman of the African Union Commission, tweeted: “Devastated by the news of the death of Kofi Annan. A great man, a dear brother. An immeasurable loss of a great man, a humble statesman and a global icon.”

President Barack Obama issued a statement, published by NBC, hailing Annan as a true maverick: “Long after he had broken barriers, Kofi never stopped his pursuit of a better world, and made time to motivate and inspire the next generation of leaders.”