His teacher is the one who called the officers. 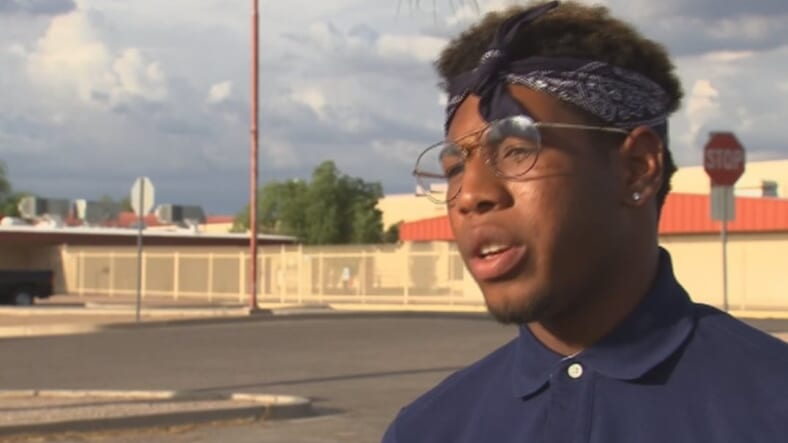 Valentino Jimenez, a senior at Apache Junction High School in Arizona, was arrested for wearing a blue bandana that he says he wears almost everyday. (Source: Screenshot of 3TV/CBS 5)

An Arizona teen was arrested last week after his teachers accused him of violating Apache Junction High School’s dress code.

Police ended up arresting four students in total after one of them refused to take off his blue bandana. On August 10th, Valentino Jimenez was walking back from lunch when he says an officer approached him about his attire.

“The officer came up to me and wanted to have a talk with me, he asked me about the bandanna and I said, ‘what’s wrong with it?’ He said, ‘the color.’ I said, ‘what do you mean? That kid’s wearing a bandanna.’ He says, ‘that’s the American flag.’ I said, ‘what’s the difference?’ She told me we can’t wear bandanas at all,” Jimenez explained to CBS 5.

Tempers originally flared after a teacher at Apache Junction High School told him to take off his headpiece. Jimenez said no and pointed out he wears his bandanna all of the time with no issue. That’s when his teacher threatened to involve authorities.

its crazy the white kids r even saying they allow them to wear bandanas n dont say anything to them bt they harass this kid….yes he could hv just removed it n yeah this was just stupid bt u really arrest him… https://t.co/B2yBSW1rER

Upset students filmed the encounter between Jimenez and a DARE officer on their cell phones. A video of Valentino Jimenez being handcuffed by police has since gone viral.

The Apache Junction Police Department said that Jimenez challenged the officer, became disruptive and as a result, was then taken into custody.

“I could’ve took (sic) off the bandana, I really could’ve. But at the end of the day, they tried to tell me I couldn’t be me, knowing damn well I wear that bandana all the time,” Jimenez said. “It was kind of humiliating if you think about it, in front of everybody, me getting arrested and they try to make it look like I did something so bad, you know?”

Three other students on the scene were also taken into custody for causing a disruption and all four minors will be referred to the Pinal County Juvenile Courts.

School officials claim Jimenez violated the dress code, but the actual school policy doesn’t mention bandanas, which is why his classmates believe the arrests were racially motivated.

A letter written by AJHS Principal Dr. Angela Chomokos was sent home to parents following the incident, which in part reads:

“While we did have some disorderly students who became emotionally charged, the bulk of our students remained focused and proceeded to class. Our regular DARE officer and two other police officers from the Apache Junction Police Department assisted with the situation and aided the administration in removing the disorderly students and encouraging others to go to class. I assure you that this type of behavior is not typical of our students or community. We have purposeful and focused students who show a great deal of pride in their school and their peers.”