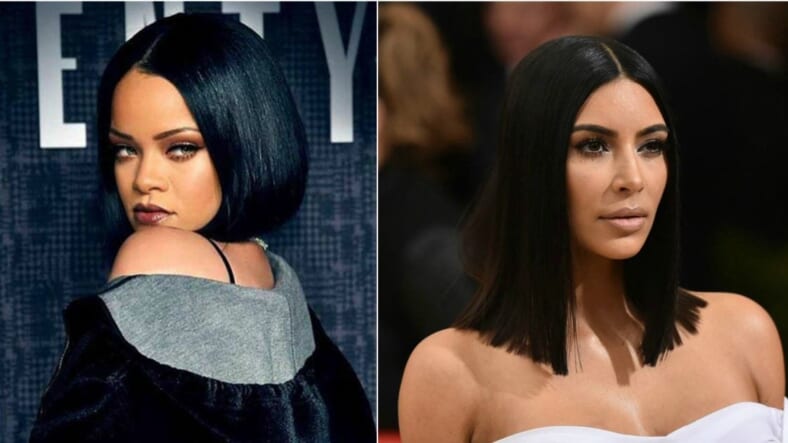 Another day, another fashion magazine missing the mark and trying to snatch the edges of Black women by stripping them of credit for styles they’ve worn for ages.

In the latest case of cultural appropriation, Marie Claire is in hot water for publishing an article about a so-called hot summer hair trend named ‘glass hair.’ The smooth style is  actually a silk press, which is a method hairdressers have long used in salons to smooth out the curls and coils of Black women well before it became trendy.

The clueless magazine however gave all the glory to Kim and Khloe Kardashian for discovering the sizzling hair craze and pretty much deemed them trendsetters for rocking the “glass” look styled in a smooth, silky bob.

But Black Twitter begged to differ and tore Marie Claire a new one with facts. People on social media pointed out the obvious; how the magazine missed the many celebs like Rihanna, Kelly Rowland and style maven Angela Bassett who rocked silk presses long before the Kardashians did.

Glass Hair Is the Instagram Trend You’re About to See Everywhere https://t.co/L6h72mSdrA pic.twitter.com/wniE0X6H4l

It’s called a silk press. I have seen this everywhere since the 90’s when the girls at HBCU’S rocked the look. Please consider hiring Black Women and Men to avoid erasing our contributions to your “trends.” This is hurtful & offensive. pic.twitter.com/kD4832t3Fc

At this point, I’m thinking mayonnaise was created by some black person and Mrs. BestFoods-Kardashian strolled by the stand and said ‘Yum,’ and Ye Olde Marie Claire printed, ‘There’s This New Thing Named Mayo and the K Girls Are Bringing It!’… Or something.

“At this point, I’m thinking mayonnaise was created by some black person and Mrs. BestFoods-Kardashian strolled by the stand and said ‘Yum,’ and Ye Olde Marie Claire printed, ‘There’s This New Thing Named Mayo and the K Girls Are Bringing It!’… Or something,” said one commenter.

When they try to pass off your old hair as new hair. pic.twitter.com/6RJotaFxQp

So, are we also just not going to acknowledge that grandmas have been pressing hair with a hot comb and some good Bergamot grease since the beginning of time too? What they not gonna do is forget Madame C.J. Walker!
Others called out the magazine for not having enough people of color employed on their staff so articles like this don’t come to light.

Umm u really trying to give the Kar…?u kno what, these embarrassing articles wouldn’t happen if you had more black women as editors/writers pic.twitter.com/8W9w4kL3bb

Another case of cluelessness

Recently Black twitter called out Disney too over Princess Tiana’s hair in the the upcoming Ralph Breaks the Internet after the trailer dropped with the Princess looking a lot less like the beloved Black girl who became a cultural phenomenon.

In the trailer, Sarah Silverman’s character Vanellope von Schweetz meets a group of Disney’s classic princesses like Cinderella and Moana. Princess Tiana is there too at first looking like her iconic self from the movie with her hair in an up-do and dressed in her green princess gown.

But it’s a sleepover scene that folks are taking issue with, Deadline reports. For some reason, Princess Tiana’s facial features are changed and she looks more ambiguous – her skin is a few shades lighter and her natural hair is all over her head. That in itself is unrealistic – many pointed out – given how a Black woman’s hair that has been straightened or pressed or permed, wouldn’t just revert back to its natural state.

When will “they” ever learn. Just ask any of us first!