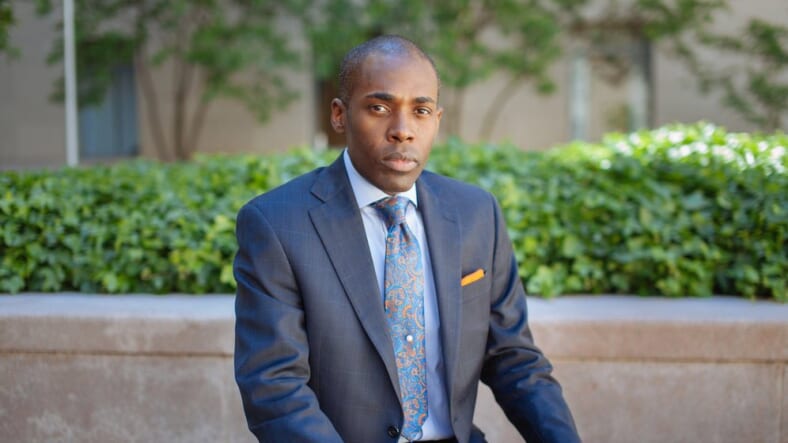 Paris Dennard, a conservative commentator and Donald Trump apologist, has been suspended by CNN. An explosive report surfaced revealing that Dennard was fired from his previous job at Arizona State University for sexual misconduct.

The Washington Post reports that Dennard was terminated in 2014 “for making sexually explicit comments and gestures toward women, according to documents and a university official.”

Dennard was the events director at the university’s McCain Institute for International Leadership. According to a report, Dennard made sexually explicit comments toward a woman who worked for him. He told her he wanted to have sex with her. Dennard who is now a member of the President’s Commission on White House Fellowships, “pretended to unzip his pants in her presence, tried to get her to sit on his lap, and made masturbatory gestures,” according to a university report obtained by The Washington Post.

ASU’s 13-page investigative report reveals the claims which covers 2013 and 2014. The second woman said Dennard would harass her by throwing things at her. One day she caught him looking at her breasts. She said she then tried to adjust her shirt and then Dennard replied: “Don’t worry, I’ve already seen it.”

According to the report, Dennard acknowledged saying that.

Dennard reportedly admitted to touching the first victim’s “neck with his tongue,” according to the report.

According to the report, Dennard “came up behind EMPLOYEE 1 during another [McCain Institute] event and whispered in her ear that he wanted to ‘f—’ her.”

The report says Dennard and one of the women socialized outside the office and engaged in “banter of a sexual nature.”

Even so, Dennard “engaged in much of this behavior in the workplace and/or during work events. Such conduct, of course, is inappropriate . . . unprofessional and unbecoming of a university employee, and in violation of ASU policy.”

The report found that Dennard engaged in “serious misconduct.” He “involuntarily separated” from his post in early 2015, after being put on leave. The report, however was never made public until now. A university official spoke to the Post on the condition of anonymity.

One of the women feared coming forward saying:  “We all know what it’s like to be on [Dennard’s] bad side — he will make your life miserable,” one said. “What if he comes back to the office? What if he comes to an event? Does he know where I live?”

Dennard has sided with President Trump saying that his past sexual transgressions shouldn’t affect his presidency.