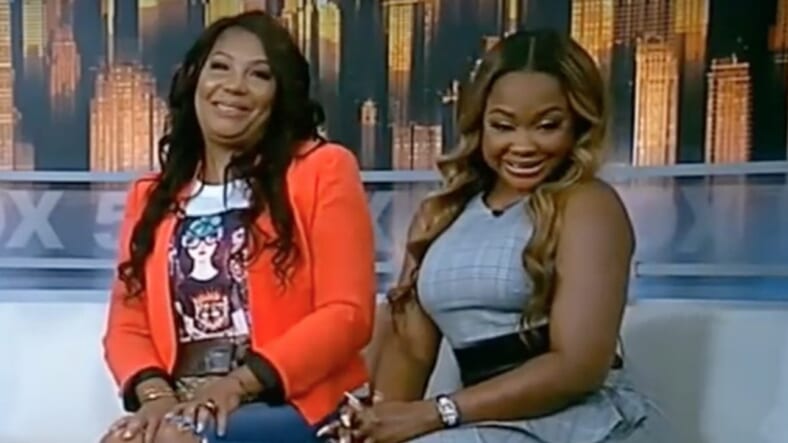 We’re still a little confused about what’s going on with Braxton Family Values ever since some of the sisters refused to continue filming over some money issues. Now, the WeTV series is back on the air but none of the Braxtons have been promoting it except for Traci Braxton.

She stopped by Good Day New York with new bestie, Phaedra Parks to reveal that the former RHOA star has joined Braxton Family Values and they’re also prepping another reality show for the network.

It looks like Phaedra Parks isn’t done with the drama of reality television even after her experience on Real Housewives of Atlanta.

The interview got a little awkward when the anchors asked Traci about her sisters and she basically said they no longer discuss business matters with each other. Considering the siblings have been working together on music, touring, and their reality show for years, that sounds like a bit of a problem.

“When the show was on a little hiatus I continued to work and Phaedra was contacted and said of course I would love to do some adventures together and we have been having a ball since.”

Tamar, Toni, Towanda, and Trina have reportedly resumed filming the show but Traci refused to reveal what made them changed their minds.

“I don’t get into their business and they don’t get into mine. When you put a lot of business things in the mixture of a family setting it tends to be messy,” she said. “We talk and giggle and laugh we just don’t talk about business.”

It seems Traci Braxton and Phaedra Parks have even more tricks up their sleeves if Bad Girls Club alum Natalie Nunn‘s recent Instagram post is to be believed.

It looks like #TraciBraxton, #NatalieNunn, #PhaedraParks and #Luenell got a new show in the works!