AP-NORC Poll: Trump gets low marks, except on the economy 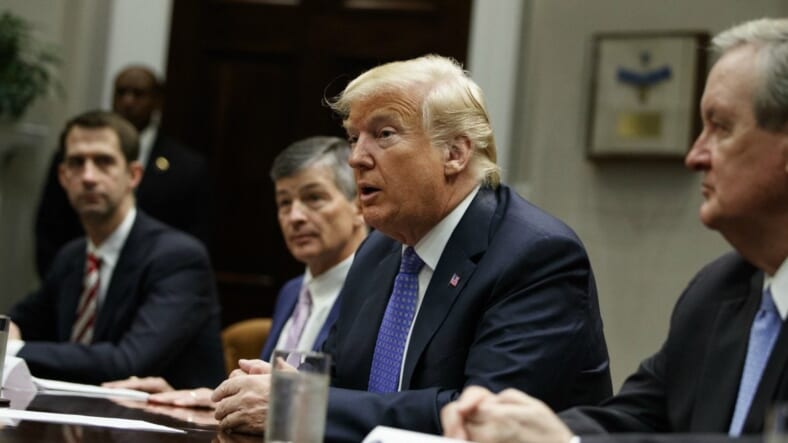 By HANNAH FINGERHUT, Associated Press
WASHINGTON (AP) — President Donald Trump continues to receive poor marks from a majority of Americans on his overall job performance, even as he enjoys relatively good assessments of his handling of the economy.

A new poll released Friday by The Associated Press-NORC Center for Public Affairs Research finds 60 percent of Americans disapprove of Trump’s work as president, compared with 38 percent who approve.

Trump’s approval rating has been largely stable over the course of his presidency.

Ratings of Trump among all Americans are equally dim on a host of issues, including immigration and health care, even as the president continues to receive high marks from his base of Republican supporters.

Here’s a look at how the president fares in the new survey:
___
ECONOMY ABOVE ALL
Trump receives his best marks from the public on the economy: 51 percent say they approve of his handling of the economy, more than the share who approve of his performance on any other issue.

READ MORE: Michigan cop who used stun gun on man holding a baby is suspended
___
TRUMP AND RUSSIA
About a third of Americans say they approve of the president’s handling of special counsel Robert Mueller’s investigation into Russian meddling in the 2016 election.

Two-thirds of Republicans approve of Trump on the issue, but that’s among the lowest shares of positive views among Republicans of the 10 issues included in the survey.

The poll was conducted before a jury on Tuesday found Paul Manafort, Trump’s former campaign chairman, guilty on eight counts of financial crimes and before his former lawyer Michael Cohen pleaded guilty to charges that included campaign finance violations he said he carried out in coordination with Trump.
___
LOW RATINGS ON HEALTH CARE, IMMIGRATION
Trump continues to receive low approval ratings on both immigration and health care, two issues that Americans tend to name as important to them in the coming midterm elections.
Overall, 38 percent of Americans approve of Trump on immigration, while 36 percent approve of his work on health care.

Democrats are particularly negative toward the president on these issues — just 8 percent say they approve of him on each.

About three-quarters of Republicans approve of Trump on immigration, and a somewhat smaller majority — 7 in 10 — approve of how he’s handling health care.

Nearly half of Americans — 47 percent — approve of Trump when it comes to North Korea, while 52 percent disapprove. The share who approve of the president on North Korea spiked to 55 percent following his June summit with North Korean leader Kim Jong Un.

Republicans continue to express support of the president on his handling of North Korea, with 82 percent saying they approve.

About 2 in 10 Democrats approve of his handling of North Korea as well — among the highest Democratic ratings of the issues asked — as do half of independents.
___
CONSERVATIVE VIEWS
Conservative Republicans are staunchly supportive of the president overall, with 86 percent saying they approve of the president’s job performance. This uniform approval carries over to most issues, including the economy (95 percent), taxes (90 percent), trade (87 percent) and North Korea (89 percent).

But when it comes to the budget deficit, conservative Republicans are somewhat less approving — 75 percent say they approve of Trump’s handling of the issue.

Conservative Republicans also are somewhat less likely to approve of the president on the Russia investigation (76 percent) and health care policy (77 percent).
___
NATIONAL OUTLOOK
Most Americans think the country is headed in the wrong direction: 62 percent say the nation is on the wrong track, compared with 38 percent who say the nation is headed the right way.
___
The AP-NORC Poll of 1,055 adults was conducted Aug. 16-20 using a sample drawn from NORC’s probability-based AmeriSpeak panel, which is designed to be representative of the U.S. population. The margin of sampling error for all respondents is plus or minus 4.2 percentage points.
___
Online:
AP-NORC Center for Public Affairs Research: http://www.apnorc.org