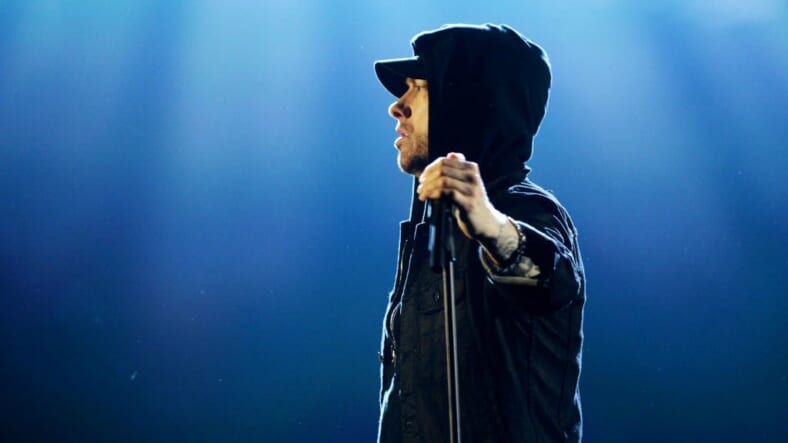 Eminem has learned the hard way that if you send for Donald Trump, the Secret Service will answer your call.

The Detroit rapper, whose real name is Marshall Mathers, dropped a surprise new album called Kamikaze early Friday — the follow-up to 2017’s Revival — and on it, he reignited his feud with Trump.

As noted by New York Daily News, in the third verse of the first track, “The Ringer,” Em claims his 2017 freestyle for the BET Hip Hop Awards earned him a visit from the Secret Service.

“These verses are makin’ him a wee bit nervous/ And he’s too scared to answer me with words/ ‘Cause he knows that he will lyrically get murdered,” Eminem raps. “But I know a least he heard it.”

He continued on to say Trump — who he dubbed “Agent Orange”— “sent the Secret Service/ To meet in person/ To see if I really think of hurtin’ him/ Or ask if I’m linked to terrorists/ I said, ‘Only when it comes to ink and lyricists.”

The Secret Service in a statement said it “does not confirm or comment on the absence or existence of specific investigations.

“We can say, however, the Secret Service investigates all threats against the President.”

Mathers also urges those who support Trump to stop listening to his music.

“’Cause like him in politics, I’m usin’ all of his tricks/’Cause I’m throwin’ that piece of s–t against the wall ‘til it sticks,” he adds.

This isn’t the first time the Secret Service has had to pay him a visit. The agency also investigated Slim Shady following the leak of his song, “We Are Americans,” in 2003.

“F–k money, I don’t rap for dead presidents/I’d rather see the President dead/ It’s never been said, but I set precedents,” he rapped.

Kamikaze features 13-tracks, including Em’s track for the upcoming Venom, starring Tom Hardy and Riz Ahmed, Page Six reports. The outlet also notes two of the tracks are voicemails between Eminem and his manager Paul Rosenberg.

In the first one, Rosenberg says he’s listened to the new album and asks Eminem: “Are you really going just to deride everybody who, you don’t like what they have to say about you or the stuff you’re working on? I don’t know if that’s really a great idea, it’s like what’s next, ‘Kamikaze 2,’ the album where you reply to everybody who didn’t like the album that you made replying to everybody that didn’t like the previous album? It’s a slippery slope, I don’t know if it’s really a good idea.”