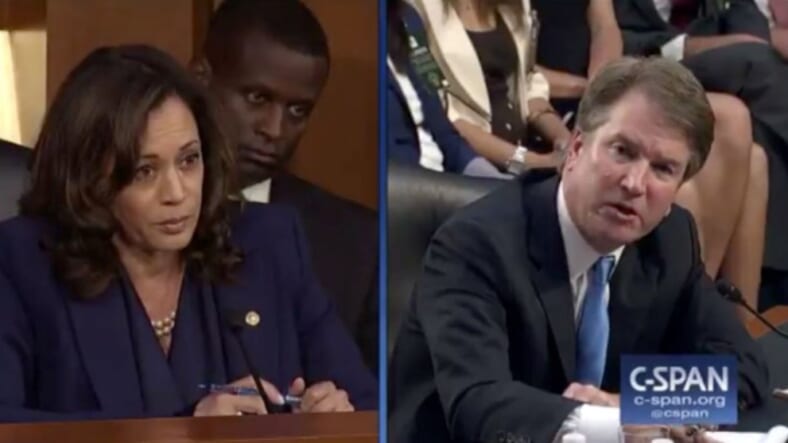 In a very intense exchange, California Sen. Kamala Harris pressed Supreme Court nominee Brett Kavanaugh in a pointed line of questioning asking if he had ever spoken to anyone at the law firm of President Donald Trump’s personal attorney Marc Kasowitz about any aspects of special counsel Robert Muller’s Russia investigation.

It did not go well for Kavanaugh.

As Kavanaugh looked on stumped and dumbfounded, he bumbled over his words while refusing to name anyone he possibly had talked to as Harris leaned in and wouldn’t let up her teeth-clenching line of questioning for several minutes, the HuffPost reports.

“I think you’re thinking of someone and you don’t want to tell us,” the senator said. “Did you speak with anyone at that law firm about Bob Mueller’s investigation?”

“Is there a person you’re talking about?” Kavanaugh replied, appearing perplexed.

“I’m asking you a very direct question — yes or no?” Harris continued.

This scorching exchange goes on and Kavanaugh looks visibly uncomfortable.

Has Supreme Court nominee Brett Kavanaugh had a conversation about Robert Mueller or his investigation with anyone at Trump’s personal attorney’s law firm?

We don’t know. He refused to answer my question. pic.twitter.com/PAKxDGvEtZ

There’s no word on what receipts the California Senator might have which drove her to asking Kavanaugh about conversations he might have had about Mueller. At issue, is Kavanaugh’s position on how much power a president should have and the possibly about how he might rule when matters arise related to Muller’s Russia investigation.

Basically, will he truly operate independently or act as if he’s in Trump’s pocket.

The confirmation hearing has been anything but ordinary.

On Tuesday the internet exploded with conspiracy theories after a former clerk for Kavanaugh, who was seated behind the Supreme Court nominee, was accused of making a white supremacist hand gesture.

Zina Bash could be clearly seen sitting behind Kavanaugh, was caught on camera looking down at her cell phone for a moment and then put her hand on her arm. Then her hand remained in the gesture, similar to the sideways “OK” symbol that white supremacists tend to throw up to signify “white power.”

—Did a former Trump staffer flash the white power symbol at the Kavanaugh hearing?—

Harris said she intends to follow up with Kavanaugh in writing after the hearing. It resumes today.