Did a former Trump staffer flash the white power symbol at the Kavanaugh hearing?

Some people around the Twitterverse believe that Zina Bash, a one-time clerk for the Supreme Court nominee made a white supremacist gesture during the Senate procedure 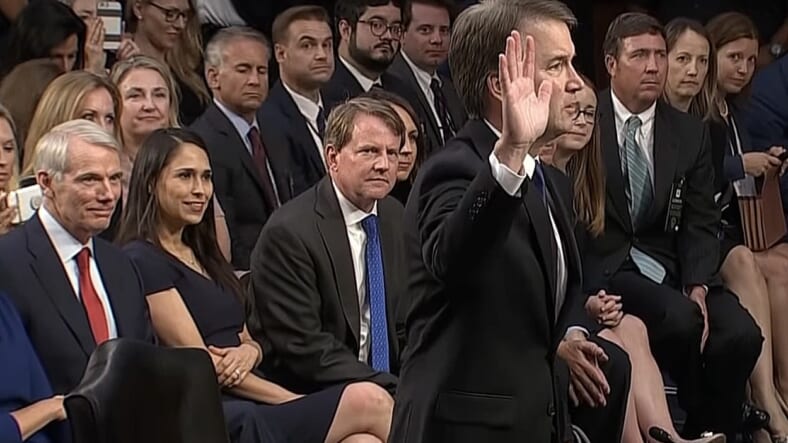 Zina Bash, a former clerk for Kavanaugh who also had worked in the Trump administration, could be clearly seen sitting behind Kavanaugh, was caught on camera looking down at her cell phone for a moment and then put her hand on her arm. Then her hand remained in the gesture, similar to the sideways “OK” symbol that white supremacists tend to throw up to signify “white power.”

READ MORE: Colin Kaepernick’s new Nike ad with Lebron, Serena and refugees will give you chills

Eugene Gu, a doctor with more than 200,000 Twitter followers tweeted that Bash was “flashing a white power sign behind him during his Senate confirmation hearing. They literally want to bring white supremacy to the Supreme Court. What a national outrage and a disgrace to the rule of law.”

His tweet received over 13,000 retweets that evening, with the video embedded in his tweet, which zooms in on Bash’s hand, is approaching 4 million views.

When Bash heard her name was trending for throwing up racist gang signs she quickly explained that she was just scratching her arm.

But skeptics like Amy Siskind point out: “If you watch the video you’ll see she held it in place for a long time. It’s not a natural resting position.”

Kavanaugh’s former law clerk Zina Bash is flashing a white power sign behind him during his Senate confirmation hearing. They literally want to bring white supremacy to the Supreme Court. What a national outrage and a disgrace to the rule of law. https://t.co/uQGOpNa6xg

Now Bash’s husband, John Bash, the U.S. attorney for Western Texas has come to her defense, and called the accusations against his wife “repulsive.”

“Zina is Mexican on her mother’s side and Jewish on her father’s side,” said Bash. “She was born in Mexico. Her grandparents were Holocaust survivors. We of course have nothing to do with hate groups, which aim to terrorize and demean other people—never have and never would.”

“Everyone tweeting this vicious conspiracy theory should be ashamed of themselves,” he continued. “We weren’t even familiar with the hateful symbol being attributed to her for the random way she rested her hand during a long hearing.”