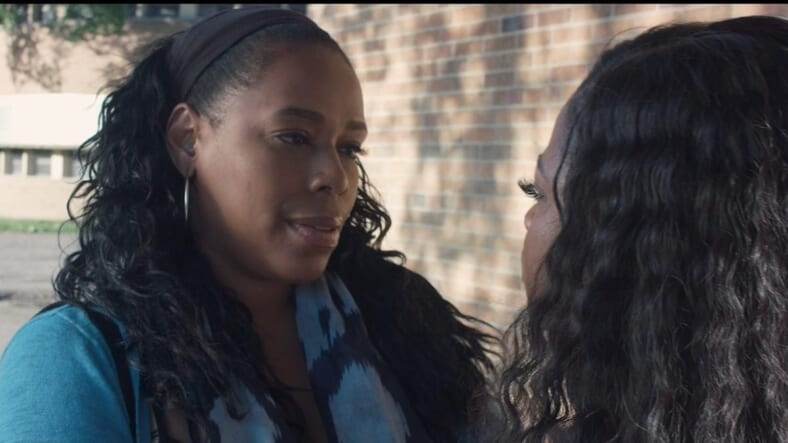 Nicci Gilbert, Grammy-nominated lead singer of Brownstone, is taking on the big screen in her new short film Social Conflict.

Clocking in at just under 30 minutes, the film manages to pack in a full range of emotions and issues. The opening montage offers viewers a mini-tour of Detroit, Gilbert’s hometown with a few sobering statistics about the rebounding metropolis.

Social Conflict explores important issues that impact city life and the country at large such as gun reform, school safety, sexual identity and substance abuse. In the film, Gilbert stars as Charmayne Davis,  a beloved teacher at a tough public high school. Her life is turned upside down when her son, who is a student at the same school where she teaches, shoots and kills a teacher on school grounds one morning.

Then in a plot point ripped straight from today’s headlines, the Detroit Public Schools system implements a policy that allows teachers to carry guns. In real life, it was recently reported that U.S. Education Secretary Betsy DeVos is considering using federal money earmarked for education purposes to arm teachers.

Gilbert’s character Charmayne has to straighten up after spending the summer in a alcohol and drug induced haze grieving the death of her colleague and the fact that her son is in prison. She somehow manages to get it together and go to work, only to be met by a group of angry parents who are upset that their children’s teachers might be strapped.
Native Detroiters will appreciate the authenticity of the the confrontation between Charmayne and the protesters. Nothing like getting a Detroit girl mad and get a good old fashioned cuss out that goes straight for the jugular. No wolf tickets are sold in the D.

The bulk of Social Conflict focuses on Charmayne’s first day back at work with only a handful of students because most parents kept their kids at home instead of sending them to classrooms helmed by armed educators.

Charmayne’s annoying, Trump-loving principal Fitzgerald (Dwayne Barnes) seems downright giddy to have teachers with guns. As expected, Charmayne’s first day back at the school is emotional and of course her son is heavy on her mind.

A fellow teacher gives Charmayne information that changes everything Charmayne thought she knew about why her son shot and killed her colleague. A very dramatic ending wraps up the narrative and adds another layer to the national conversation on the issues the film explores.

Gilbert not only starred in Social Conflict, but also wrote and produced it. It’s clearly a labor of love and comes straight from the heart. Pretty much the entire cast turns in believable performances. In particular the actors who play Charmayne’s students (Tyrone Larkin, Maliki Graznak, Johnathan Curry, Sydney Johnson) did a great job. There are definitely some stars in the making in this film.

Social Conflict is currently making the film festival rounds after premiering at the BronzeLenz Film Festival in Atlanta where Gilbert now resides.