She was fined during a match with Naomi Osaka for illegal coaching, racket abuse (she threw it in frustration) and verbally abusing a judge. 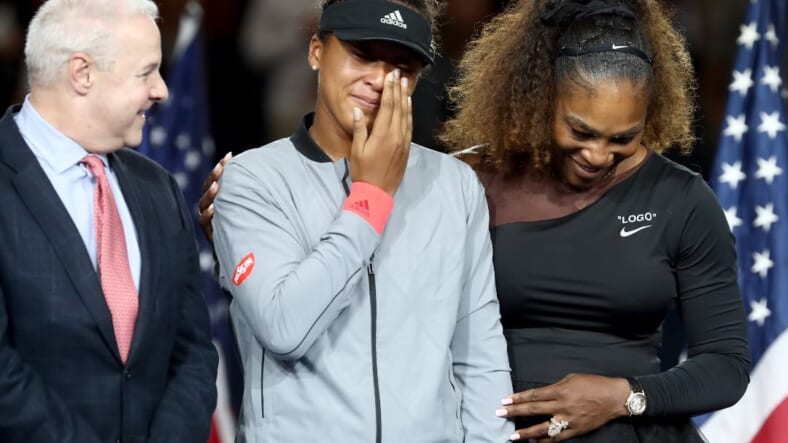 Naomi Osaka of Japan and Serena Williams of the United States react after the Women’s Singles finals match on Day Thirteen of the 2018 US Open at the USTA Billie Jean King National Tennis Center on September 8, 2018 in the Flushing neighborhood of the Queens borough of New York City. (Photo by Julian Finney/Getty Images)

Tennis officials are making Serena Williams pay—literally—for standing up for herself on Saturday against a U.S. Open umpire.

The U.S. Tennis Association has handed the tennis great a $17,000 fine for her pointed conversation with umpire Carlos Ramos in which she politely informed him that she does not have to cheat to win and called him a “thief” for taking a point from her, the Washington Post and other news organizations are reporting.

Serena is right. I was there. And worse, he was baiting her. https://t.co/CinW6AJJNo

Williams’ conversation with the official, which included a drop-the-mic moment as she finished what she had to say and strutted away, came amid an accusation that her coach, Patrick Mouratoglou, was giving her hand signals from the sidelines.

The incident came as Williams lost to Naomi Osaka, a player of Haitian descent from Japan, prompting many on social media to note that Osaka’s win did not mark a loss for Williams, but rather a victory for all Black women tennis players. Williams has been outspoken about her view that officials administer drug tests to her more often than other players, and recently was taken to task by the French Open, which banned catsuits after she wore one on the court.

Williams has not responded directly to the umpire incident, but did post an image on Instagram on Sunday of a girl in school clothes with a large yellow “S” on her black shoulder bag. “What does your ‘S’ stand for?” Williams posted, adding the hashtag, “#BeSeenBeHeard.”

It’s that time of the year again ? @ceddyced1125’s beautiful daughter is all smiles for the first day of school ? What does your ‘S’ stand for? #ShareYourSSunday #BeSeenBeHeard

At least one historic figure in the world of tennis said on Twitter that she has Williams’ back, calling out what she views as sexism;

“Several things went very wrong during the U.S. Open women’s finals today,” posted retired tennis star Billie Jean King. “Coaching on every point should be allowed in tennis. It isn’t and, as a result, a player was penalized for the action of her coach. This should not happen.”

(1/2) Several things went very wrong during the @usopen Women’s Finals today. Coaching on every point should be allowed in tennis. It isn’t, and as a result, a player was penalized for the actions of her coach. This should not happen.

She received widespread support on social media from fans and celebrities alike:

Everyone should listen to this from Serena Williams. pic.twitter.com/TF03dhpq2P

What hasn't changed is the way @SerenaWilliams had been policed and disrespected since the moment she stepped on the court as a kid decorated with beaded braids. #USOpen