Turner's speech on voting rights is the one thing you need to hear today. 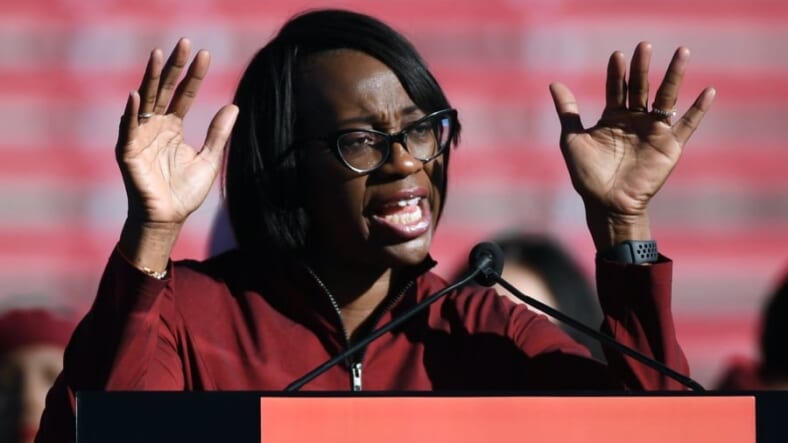 speaks during the Women’s March “Power to the Polls” voter registration tour launch at Sam Boyd Stadium on January 21, 2018 in Las Vegas, Nevada. Demonstrators across the nation gathered over the weekend, one year after the historic Women’s March on Washington, D.C., to protest President Donald Trump’s administration and to raise awareness for women’s issues.

Ohio State Senator Nina Turner delivered a fiery speech today in Washington, D.C., at the “Power of the Polls” event calling out voter disenfranchisement as a reinvented form of racism.

“After Reconstruction in 1877, some Jim Crow laws lasted until 1975 on purpose. What was the purpose of Jim Crow? To carry out what the Black codes set in motion, on purpose— not by accident,” Turner said to a crowd at New Bethel Baptist Church.

“It is on purpose that disproportionally African American women and men are locked up at higher rates, than are numbers and percentages in the population of this country. It’s on purpose, not on accident.”

The event’s objective was to highlight the struggles of formerly incarcerated people who deserve to earn their voting rights back.

Currently in four states—Florida, Kentucky, Virginia, and Iowa— anyone with a felony loses their right to vote for life.

This fall, the Voting Restoration Amendment will hit the ballot in Florida. With enough votes, more than 1.5 million people could earn their right to vote back.

Nina Turner speaks at Power To The Polls https://t.co/kAFF8lBKcT