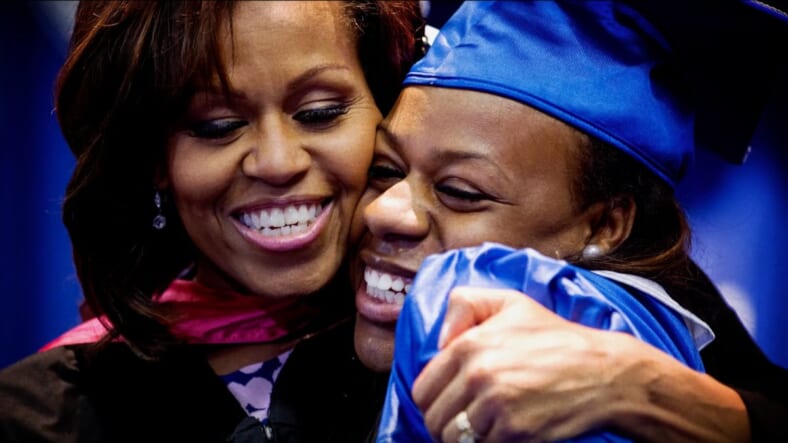 Our Forever First Lady Michelle Obama is back at it again with another timely message to the children of this country, who may be questioning their place in the world.

This week, Obama alongside famous friends like Nick Cannon, Ciara, Jussie Smollett, Kelly Rowland, Karlie Kloss and more, have teamed up to tell kids that nothing should stand in the way of their education.

During the Reach Higher’s “Worth It” video, which premiered on Tuesday, the celebs briefly share their own insecurities and obstacles while explaining how they overcame them to become the people fans know and love today.

In 2015, as part of Obama’s Reach Higher initiative, the Better Make Room campaign was launched to support Generation Z celebrate education, improve the national conversation, and reach students directly where they are.

Even after leaving the White House, Mrs. Obama has remained committed to this cause by creating inspirational digital content and visiting classrooms all over the country to personally champion young people on the path to higher education.

“We started Reach Higher because we want every student, no matter their background, to know that higher education is worth it – they are worth it,” said executive director Eric Waldo. “All of the hard work that goes into applying to and completing college will lead to a better future for themselves, their families, and their communities.”

Students who sign Reach Higher’s “Worth It” pledge can join the movement, engage with peers in their own online community, gain access to valuable resources and also be celebrated on social media as they move closer to their goals.

To learn more, check out: BetterMakeRoom.org