The Carters played two nights at the Rose Bowl over the weekend. 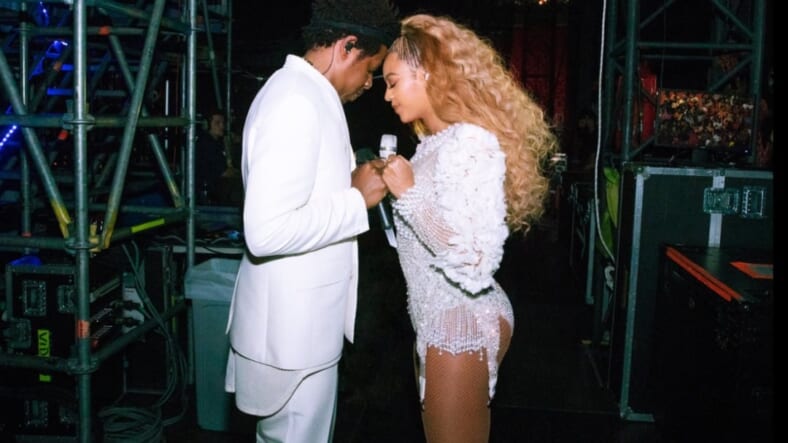 The Carters took over Los Angeles over the weekend when their On The Run 2 tour served up two incredible shows at The Rose Bowl in Pasadena. Tons of fans and stars clamored to see Beyonce and Jay-Z take the stage and play out their tumultuous marriage and road to recovery in a nearly three-hour set.

TheGrio was front and center for the show on Sunday night and the long list of celebrities we ran into was almost as exciting as the show we got to see.

We spotted Yara Shahidi and with her mom, Kerry right after the show as well as Lena Waithe who enjoyed the impressive concert with two of her friends. We also saw Angela Bassett walking through the crowd and caught a glimpse of Kim Kardashian West when she arrived with her sister, Kourtney Kardashian, Kris Jenner, and Larsa Pippen.

Ballers star, London Brown was in the crowd and so was Beyonce’s mom, Tina Knowles, who walked hand in hand with her hubby Richard Lawson.

Janelle Monae was enjoying the show almost as much as Lisa Raye McCoy, who we spotted dancing near Tameka Foster and Kim Porter.

NBA star, Draymond Green was in the house with a lovely date and everyone seemed just as enamored with Beyonce and Jay-Z as we were.

According to reports, Oprah Winfrey attended Saturday night’s show along with several other celebs.

As expected, the concert was filled with touching moments between Beyonce and her hubby who performed some old hits like “Song Cry” and “Public Service Announcement” as well as several songs off of Everything Is Love with his wife.

Both Jay-Z and Beyonce performed their hits with flare, as if they haven’t been trekking across the world for months. No matter how many times we see them in action, it’s always hard to believe they can pull off their incredible sets so effortlessly.